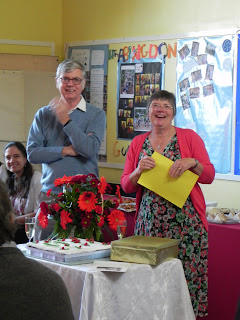 This quotation from Saint Exupéry has been hanging on my parents' kitchen wall since we were children.


Family legend has it that when my Father wrote to his brother, asking him to be best man, my uncle wrote back accepting but on condition Dad was his best man the week before. I wonder what the rest of the family thought, spending two weekends in a row attending twin brothers' weddings in different family-of-the-bride dependent locations? Perhaps it's best left consigned to history - big year for my Grandparents, certainly, and I suspect they were thankful to be parents of the grooms and not the brides! 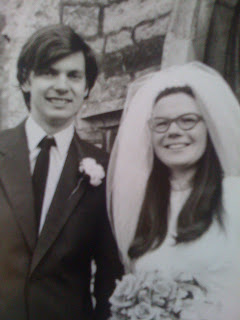 So a wedding happened, and a marriage began. And several children, much travelling (anyone else camped (under canvas) for three months straight from California to Canada, down to Mexico and back again? With three children under 11?), lots of growing older and sharing the same vision, and

Forty Years on, and the two Ruby Wedding Celebrations were spread out a little farther (to allow for a rather jolly trip (not by me) to Zanzibar in the middle). My Uncle and Aunt's party in August, and Mum and Dad's yesterday. 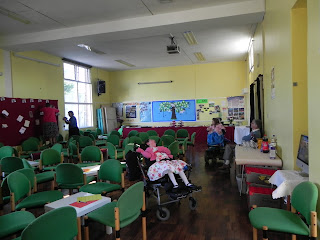 Lots of preparation involved in turning the church hall into something suitably Rubily festive, without hiding the Guide and Scout noticeboards since Guiding and Scouting is how Mum and Dad met, and since Dad's old Scout Leaders were able to attend. Importing the youngest and newest Guiders as washer-uppers and drinks-servers seemed quite appropriate too, really.

Friends and family filled the hall 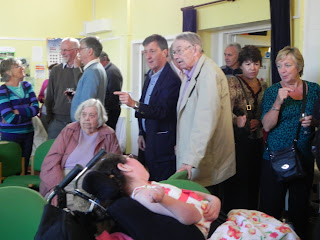 Four generations , plus friends including some not seen since the wedding. Warmth and laughter and conversation, scones and sausage rolls and sleeping babies. 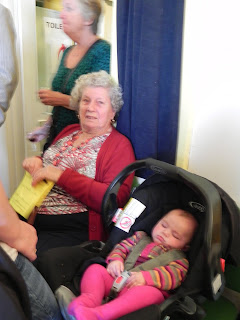 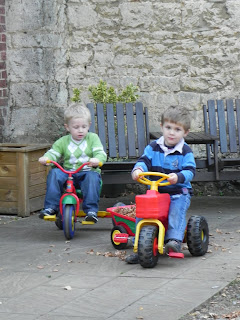 and an attempt to summarize a marriage in 50 photos or less. 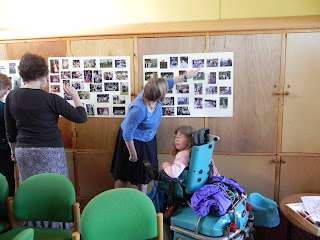 And then toasts, and more friends whipping through the clearing up in record timing, and more food and home with two tired grandchildren, knowing that the other Beales Junior were either present in Zanzibar or are preparing for Grandparent invasion in Scotland next month. We thought of you all. We're thinking of you still actually; wishing you were here to help plough through the piles of mini pizzas and chocolate brownies, and wondering if you have any ideas to use up champagne which was poured out and then not drunk.

Big thanks to everyone who helped out, and bigger thanks to Mum and Dad, for making the decision to get married and to go on being married; for putting up with everything we put you through and to keep on being our parents anyway; for giving us a stable loving home, and giving your children and now your grandchildren an example of what it takes to grow a good marriage.

Happy Anniversary! And I'm so pleased that finally there were no other family Graduations, Weddings, Dedications or other events to get in the way of actually managing to celebrate with you.

ps - Dad - we really did have a party for Grandma and Grandad - anyone else in the family care to prove me right on this?
Posted by Tia at 20:08

Email ThisBlogThis!Share to TwitterShare to FacebookShare to Pinterest
Labels: Friends and Family

Looks like a very happy celebratory day.
Sending my love and congratulations to the still happy couple.

I've never seen anyone who has my same blog design!! :)

You look so like your mum when she was younger!!!!

I've been hearing that quite a bit this week!