Sign 26137 that you may have a medically complex child

When you go to the Theatre Direct Admissions Unit, and the day's patients' notes are all set out neatly on the top of the nursing station. 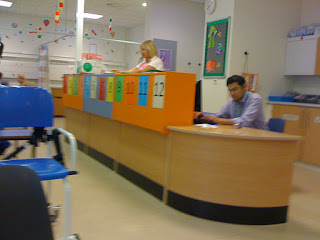 And you can tell, instantly, what number you're going to be, because your child's notes are not just a neat pink folder but a giant, sellotaped together because it's falling apart because it is so heavy green and white box full of big fat pink folders.

No surgery today, incidentally, just sorting through photos. No surgery next month either, which is nice, ish - been delayed until Feb but should still be over by Easter.

On a not entirely unrelated note, if giving your child a suppository shortly before a carer is due to come and give her a lovely shower, it is probably best to check said carer is actually coming and is not in fact at home making mince pies having completely forgotten about the shower.

On the plus side; I now have no need to share the Chocolate Nutella Sea Salt Fudge I made earlier. Although I'm not sure that a whole batch is necessarily the best thing. I would share it with the girls, but the Little Princess turned her nose up earlier, preferring broccoli. These are the times which remind me she is adopted.

Email ThisBlogThis!Share to TwitterShare to FacebookShare to Pinterest
Labels: hospital

I've nominated you for The Versatile Blogger Award. Come on over to my blog to find out more.

Wishing you and your girls a wonderful Christmas with no hospital visits!

Thank you for blogging, I love to read your funny, thought provoking and eloquent posts!