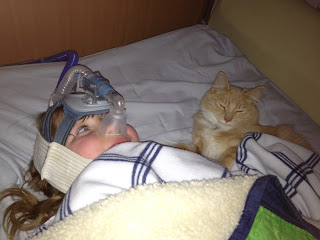 Realistic wishes, fantasy wishes, and I'm starting to think that possibly some bargaining down type wishes - "I know I can't walk and I can't ride a bike so maybe I should be allowed to live off fish and chips and buy whatever I want. Cue one very disappointed little wisher.

But not for long: 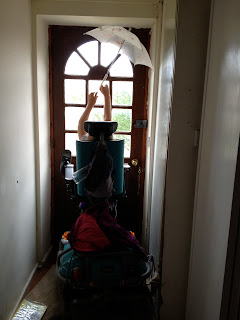 She wishes she didn't have to sleep with so many tubes. The Nippy (ventilator) is non-negotiable. Not that she wants to negotiate it; not breathing is much less fun than having a machine breathe for you when you're asleep. She'd wear it most of the day if we let her - apparently it's just so tiring, having to breathe for yourself. Poor overworked princess.

But she also currently sleeps with one tube going in, pumping dilute cranberry juice or squash into her stomach all night. And one tube coming out, draining her bladder all night long.

Historically, tLP has had a very small bladder, and overnight drainage has been the only alternative to swimmingly drenched beds every night. Once we started draining her overnight, the most logical way of helping her stay dry during the day was to limit her fluids between catheters, and instead flood her in her sleep. Pre-surgery, we managed to get her dry some of the time, and leaking-but-containable-in-a-very-absorbent-pad most of the rest of the time doing this.

And then she had surgery, and the bladder which used to hold 27mls, which grew to 250mls with oxybutinin, began to hold 400mls. And she went from not-needing-to-change-clothes-more-than-once-or-twice-a-day-dryish-as-long-as-the-pad-didn't-slip to able-to-tell-when-she-needed-a-wee. Which means that instead of cathing to a clock and hoping for the best, we are now reminding her that she might need to think about it, but mostly going with the flow (or hopefully just before the flow!). And which means that instead of limiting her liquid intake during the day, she's now free to drink as much as she likes. But, she doesn't like to drink much, because she still gets that litre overnight.

We had an appointment yesterday. And discussed all this. And now it's very much up to her. If she can drink 1500mls during the day, then she won't need extra fluids overnight. One tube gone. First step. First attempt, last night.

Second step: if she can drink 1500mls before the end of the school day, and then not drink very much at all in the afternoon/evening, and if as a result of that, we can get her measured overnight output down to less than 300mls on a regular basis, we can lose the overnight drainage bag too. Two tubes gone. This we hope to manage within a month or so, which gives me a month to record her output. Weighing bags of stale urine not my favourite activity, but better than some.

And the best thing? This is all entirely up to the Little Princess herself. I am perfectly happy to keep plugging her in (well ok, I'm not, it's a pain. But she doesn't know that). No one is going to force her to drink, no one is going to force her to take her medication by mouth. It's her choice whether she wants porridge or pureed porridge, cereal orally or cereal tubily. But if she wants to lose her tubes, she has to take responsibility for proving she can manage without them. If she chooses not to, there are no long term health consequences; she just carries on tubing it. And this works even on a daily basis - one day of not drinking = one night with an overnight feed. Natural consequences. I love it. So often we can't allow tLP to experience the consequences of her decisions, because the health implications are too serious. But with this wish, she gets to be her own fairy godmother, and I'm all for that.

wow that's great--She's spunky I imagine that she'll be motivated to do what it takes to get rid of the tubes that she can.
Debra

I think its great that tLP can start to make choices and decisions about her tubes!

Good luck with the drinking, eating and taking medicine.

Sounds positive - and up to her, on her own timescale - I like!
K x