Playscheme this morning. And I only had to remortgage half the house to pay for it. Still, I'm not sure there is a price too high for the seven uninterrupted, child-free hours.

We'll make that six and a half, as I got the timing wrong and turned up half an hour late. Oops.

Still, home to an empty and relatively tidy house. No chatter, no need to answer three hundred "Mumma?"s, no need to pick up the crayons and remove the water and flatten the playdough and repair the books and well, you get the picture.

A van parked up outside our house, blocking our driveway. I watched it for a while, wondering whether I should go out and mention the fact they were blocking the driveway. And then I decided that as I can't park there anyway, and that I wasn't expecting visitors, I could in fact just sit down and not have to do anything.

And then the doorbell went - "can we have some water, please, Missus?" Hmmm. I am naturally delighted they've come to fix our driveway so we can actually access it at last. But surely it might have made more sense (or even been common courtesy) to let me know first? I know I'm not the one paying for the work, but I like to think I have some kind of a say in things.

No matter; they're here, and my peaceful day doing nothing is now replaced with a productive, but less peaceful day watching (and hearing) men with angle grinders 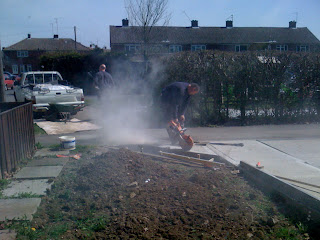 flatten and smooth (sort of; I'd not say it was the best job ever) the lumps and bumps, add a couple of food extra concrete, and dig spades into my phone cables. They still sort of work; forgive me if I don't get back to you, my connection now appears to be intermittent. And the cable's embedded into two foot of concrete.

They packed up about an hour before I needed to go and fetch the girls, leaving a bit of a botched repair job but a very very beautifully tidy and smooth new lot of concrete, joined and blended and polished and clearly going to be virtually indistinguishable from the original once it had gone off.

And then the neighbours knocked to point out the chap delivering the "any scrap metals?" leaflet had walked right through the new concrete - not just one step but three - and then walked up the ramp, knocking the concrete off his boots as he walked.

So, out with the trowel and footprints smoothed into lumpy pudding, the best finish I could get. And then the cat decided to walk across the very smoothest part of the pudding, at which point I gave up. It's still a little soggy - anyone want to come and write slogans in it for me?

Mad day tomorrow with appointments at two different hospitals and interestingly complex childcare arrangements. But for now, one child asleep, one being hoisted into bed (by someone else!) as I type this; there might be some kind of peace on its way shortly.

It's very quiet in the house - too quiet; the boiler's gone out for the second time today, third time this week. This could be interesting; it isn't repairable or serviceable and neither does anyone want to come and replace it for us as it contains asbestos. Does anyone else feel as though they tick one job off their list only for it to be replaced by two or three, each bigger than the last? 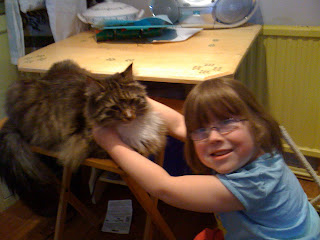 Picture unrelated but apparently she loves him acos he is her favourite and her best.

I love that pic of LF and can't hep remembering when she was afraid of cats!
UGH! When will it quit? How will they resolve the phone cable? And then add the boiler! I hope it all works out soon and you have warm weather until it is all sorted.

Sorry to hear about your boiler, we had difficulty getting ours fixed when we lived in Cambridgeshire and that was without an asbestos issue. Just a thought, which you might have already had, but would your local council carry a list of asbestos removal specialists? Best of luck with this.

Waiting for the leccy this morning and putting off calling in the heating engineer to work out how it is we have a working boiler but only cold water.