Little Fish attends our next-to-local primary school. It is the perfect school for her, and is about half a mile away. Its hours are 8.45 - 3.10, daily.

Anyone spot a problem there?

The mornings work just fine, most of the time, when Mog's not unwell or unable to sit in her wheelchair. The lie-flat chair will help with keeping her comfortable for both of those reasons as we do the morning dash,.

But I can't be at school collecting Little Fish and at home meeting Mog. Mog rides in a bus with seven other pupils, four of whom are wheelchair users. I'm not exactly sure how the driver manages to load eight children, clamp four wheelchairs down, and still manage to be here by 3.15 most days, but he does. Some days the bus is here at 3.10. And, sometimes there's the inevitable delay, a child needs the loo or doesn't want to get onto the bus or is throwing shoes at the driver, and so Mog doesn't land back here until a bit later.

I have to be here to meet Mog; she can't just sit on the doorstep waiting for us. And we have to keep Mog's transport time down to a minimum, as the escort staff don't give medication or do suction.

We live too close to Little Fish's school for transport to be provided automatically. There are no accessible buses going her way, and no company wants to do the job for the money they'd get for such a small run. We've advertised for parents walking our way who might be interested in letting her tag along with them for a small fee. We've approached local childminders. Little Fish's TA walked her home for a while, but had to stop as this meant she missed out on planning time and class staff meetings. As LF's key liaison, it's important she is at those meetings.

So, I've been collecting her early. Running home with her, racing Mog's bus back. And it's worked quite well. It's not ideal; she should not have to miss out on the end of her school day to meet her sister's needs, but it's meant she has been able to get home, have a few minutes to play before starting the whole tea and evening routine thing. It's not been perfect; when Mog's ill LF can stay on at school but then I have to drag a poorly Mog out again to collect her. And LF objects to having to the early departure from the place she loves so much. But it has more or less just about been workable.

It's also been understood this was a temporary solution. With the hope that transport would be available next year.

And now it appears that not only is transport not going to be available next year, but that it is no longer acceptable for LF to be missing school. And she must not be collected early any more. Which is understandable, except that I still can't be in two places at once, and if I could find someone else willing to do the walk, I'd already be using them.

So it seems we have two options, neither one really acceptable. Little Fish can hang around in the classroom and I can collect her late. This is a really kind offer from the staff who support her, and I do appreciate the thought. But it means she gets to watch everyone else leave and then wait. And if Mog's bus is on the slower side, it means she gets to wait and wait and wait. And I can see the support staff getting tired of that. It means we won't get home until later ourselves, which means she won't have time to play before needing food and her evening stuff. And it means that I will have to grab Mog from her bus and trundle her straight off to meet LF, not ideal if Mog gets off the bus in a bit of a state, not great for Mog if she's ill, and not wonderful if it's raining.

Or, we can try and get Little Fish into the afterschool club. Which is expensive. And we'd either be paying for a session we didn't fully use, or be picking her up even later than needed. Every single day. It's mainly for children of working parents, and priority is given to these children. So there probably aren't spaces anyway. And she'd still be late home, she'd still have her evening truncated, and Mog would still have to turn out to collect her.

It's a twelve minute walk with Little Fish, faster if you take her wheels out of gear and push, but that's like taking one of her classmates and shoving them in a buggy. How can it be this difficult to find a solution?

I'm thinking about finding one of these 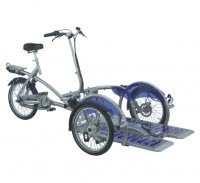 which might shave precious minutes off the run. If I could be sure Little Fish were always the first out every day, if she could be released as soon as the others go to collect coats, if we could load her faster than we can into the bus, if I could know for sure Mog's bus wouldn't begin to be loaded until ten past, oh and if I could justify the £6000 asking price, that is.

But apart from that I think it's either TARDIS or cloning.

Email ThisBlogThis!Share to TwitterShare to FacebookShare to Pinterest
Labels: disability

There have been a couple of those on ebay and/or disability equipment register in the last few months. They wern't on for cheap, but not nearly so much. Perhaps worth keeping your eye out on such things?

Only to say that I had dreadful problems of a similar kind.The Escort WAS NOT HAPPY at my son going on the bus early and also waiting outside my house,for me to arrive home.Afterschool club worked for a bit but it was very expensive for about 10 minutes,which was all the time delay.Also they didn`t like having him and eventually asked me to take him away.I can only suggest you pay a parent passing to take and bring home LF.And chuck lots of money at them.Then make sure you buy them lots of flowers etc to keep them sweet.There may be some out there not agreeing but I ended up suffering from severe stress and depression.I am just being realistic.Good Luck,and hope David Cameron is reading.

If Mog is sometimes arriving home AT 3:10, then they are clearly loading the bus up early! If she was on time, rather than early, wouldn't that make a difference? Sounds like they're not being honest about when the end of her school day is!

Guess not thinking about it didn't work??
Praying a solution maNifests itself before too long.
Hugs.

juggle, juggle, juggle. NOT fun!! Praying you can find a person to walk LF home, that sounds like the easiest option. except that finding said person is HARD to do.

The trouble with asking other parents is that the school 200 yards away is an excellent one, so the majority of children from these few streets go there. We did put an advert into the school newsletter, asking if anyone might be interested, but had no response.

Anyone coming from further away tends to drive in wet weather, and of course LF's powerchair doesn't fit into most people's cars.

Could you ask the PTA if they could help find someone? It doesn't seem much to ask, even if it's 5 mins out of someone's way.

i think you need someone to pick up LF and bring her home each day. this might mean apying an hour of someone's time.

don't suppose they will drop LF off at Mog's school would they or would that work out?

might be worth finding a local student that has nothing to do, to pick LF up?
if i lived nearer, i know i would do it!!

go thru church? get vicar to announce the need....there must be someone in the community? espec if paid? or a rota of volunteers one week on one week off...

hard to believe there isnt someone locally who could do this....

at least some regular days a week...

Just came across this, and thought you might like to see it. Those bikes, going new, for less than 4000 euros, which is under 3500 pounds. Still lots of money, but a lot less than 6000.

Can you talk to Mog's teachers etc. Because if she is getting home at the time she should be getting on the bus--they are letting them go too early.--Or maybe could her bus drop her off at LF's school?
We sometimes have to ask the bus driver if he could drop the boys off somewhere else other than home and thankfully he has always been able and willing.
Debra

Not sure how you'd go about fixing this but I can't believe that they are knowingly putting Mog into such a dangerous situation twice a day, how on earth would that pass risk assessment?! If another kid had a seizure, bus involved in an accident, traffic problems... they really need to somehow make her support available to her ALL the time she's not under your care.

Other commenters have noted that Mog and her schoolmates must be finishing lessons very early. This is normal for segregated schools in the UK - education comes a very poor second to... well, everything else really. At worst it's just a glorified daycare.

Getting LF home - try talking to local secondary school? Worth a shot at least. Won't be that long till she can take herself home!