We got home from church this morning, and the Little Princess asked "if you possible, could it we have a tray for out lunch with some things to choose on it?" Correctly interpreting this as a desire for sandwicches and nibbles and a bit of a picj your own rather than "I put it on your plate, now just eat it", and deciding it sounded far easier nicer than fiddling around and actually cooking something, I agreed. So, happily pottering around in the kitchen (apparently cheese tastes much nicer when cut into small squares, bread is tastier with the crusts cut off before they are even seen, and peppers are never going to be eaten but look pretty all neatly sliced), I heard a little rustle at the cat flap. Wondering which of our feline friends had decided to pay a visit, I looked down as a familiar, if somewhat faint meep sounded. And a very small, very thin, very scruffy Grolly staggered around the corner, looking outraged at the lack of food on tap. Having remedied this as quickly as possible (it is, after all, a mere 27 days since we saw her last - how very dare I pack the bowls away so soon?), she hoovered up a few cat biscuits and fell onto my lap for a cuddle. 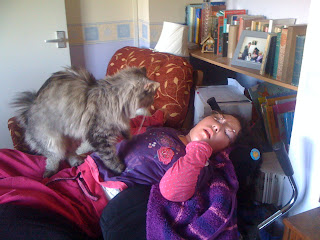 And has followed me around the house for the rest of the day. I walk to the kitchen, she takes another dab of food or a dainty lap of water. I sit down, she half jumps, half crawls up onto the chair beside me. I sit for too long, she stands in the doorway and calls me to accompany her back to the food bowl. I go to do something with one of the girls, she leaps up to assist. Or to ensure she's still the centre of attention, anyway. 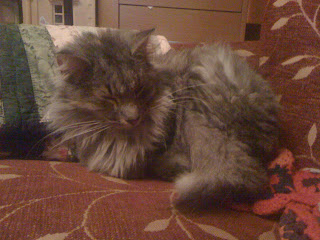 She's exhausted. Skin and bones and weighs less than at least one of the birds she's dropped at my feet in the past. She doesn't know it yet, but she'll be taking a trip to the vets tomorrow morning for a thorough going over. But, to my untrained eye, she looks like a cat who has had access to water but not a lot of food for the past few weeks, and who now needs lots of small meals and lots of rest.

It's good to have her back. I'm now researching GPS cat collars, nut at the moment I think they'd weigh more than she does.
Tia
Posted by Tia at 19:49

Glad to see her back! This is probably what you need - http://www.bto.org/science/migration/tracking-studies/cuckoo-tracking/martin

And a new mortgage...

Glad for you that she id back, maybe she was shut in somewhere?

Pleased to read the wanderer has returned.

Oh wow ,Im so pleased he has returned home.xxx