It's a family tradition now that we go away for a few days after Christmas and before school begins. Well; mostly before school begins. The company varies, the location changes, but the constant seems to be that we leave extended family behind, gather friends, and find somewhere peaceful then spend the next few days destroying the peace.

A lovely week in Shropshire last New Year; but with a fairly significant disadvantage of a non-accessible cottage. Two steps down to get in, and a picturesque but not pretty precarious steep wooden staircase to get to the bedrooms. 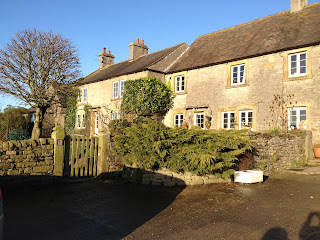 Beechenhill Farm made up for all of that. 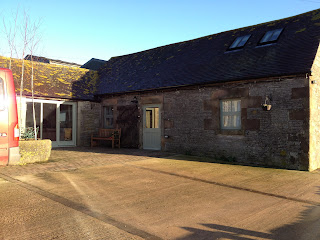 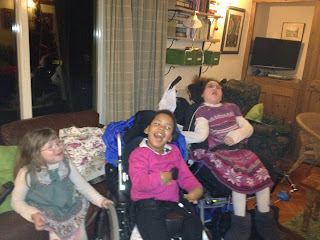 Their Cottage by the Pond is an accessible, 3 bedroom cottage converted from an old cowshed. It's beautiful. Big, wide, sliding doors. A bathroom approximately three times the size of ours (although a hoist over the bath would have made it perfect), shower chair and mobile hoist and profiling (though not height adjustable) bed. Two downstairs bedrooms, so neither Friend C nor myself had to be noble and volunteer to carry children upstairs.

Plenty of space for all three wheelchairs (unless one of the three is a six year old who drives a tank and insists on sitting in doorways in it), and a very beautiful wood burning stove in the sitting room. 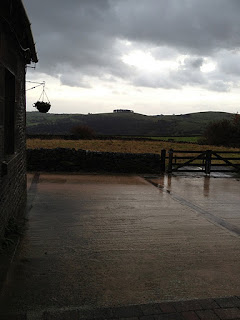 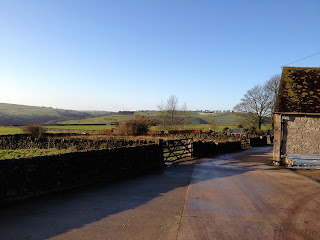 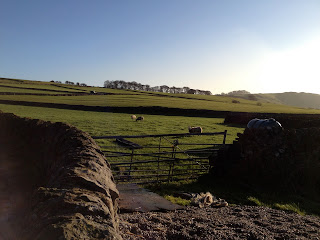 And views like these from the windows. Well, mostly views like the one at the top on the left there, or huge great walls of cloud, the High Peaks apparently having their own little mini micro climate mostly consisting of thick blinding rain. But with views like this on the one day it didn't rain, we'll not complain about the rest. Even in the rain, it was a spectacularly beautiful place to be. Soul food.

Stomach food too; we were able to buy milk straight from the milk tank, and had eggs, sausages, bacon, so-fresh-it-was-still-warm bread and a nice pile of readymeals all waiting for us when we arrived. 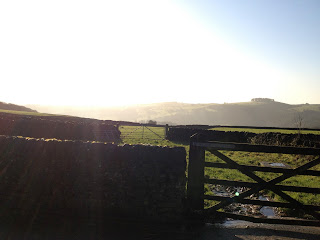 We tried to persuade the chickens waddling wide-legged around the yard to lay extra fresh eggs, but sadly they didn't oblige. The Little Princess did get to go on a mini expedition to meet the calves and refill the milk jug though; it probably doesn't come much fresher than that.

We will be back; a thick folder full of ideas for accessible outings and even rating accessible pubs and restaurants (we decided to avoid the one where only the crisps were recommended) and we didn't begin to scratch the surface of it. I think we may need to see this place in all its various seasons. 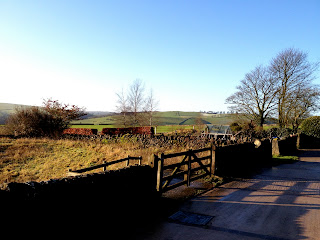 And then a nightmare of a run home, with a poorly Mog who decided the vibrations of the van were the perfect percussive chest physio. This would have been helpful, if it didn't mean we needed to pull in every 15 minutes or so to suction the loosened gunk, turning a predicted 2.5-3 hour journey into an epic 6 hour marathon. She's looking great now though; it was clearly exactly what she needed.

Oh - and how could I forget? A new first for us; enough electrical sockets in the bedrooms that we could hook up CPAP, ventilator, humidifier, 2 feed pumps, sats monitor, video monitor, and still have a spare socket for reading lamp without having to use a single extension cable. We can't do that at home!

Email ThisBlogThis!Share to TwitterShare to FacebookShare to Pinterest
Labels: Friends and Family

Sounds wonderful (apart from the long journey home). Glad you had such a good break. Very excited that we'll actually be living in the same country as you later this year and be able to spend more time with you all!

Any thoughts on when you might be gracing these shores with your presence? We are very much looking forwards to it too and I have one girl who would love to be counting the days!

looks a fab place... we shall have to give it a trial at some point! K x