This letter arrived for Miss Mog the other day. 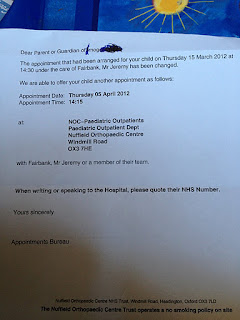 It's come from the same hospital which has repeatedly sent out letters cancelling an appointment and rearranging it for exactly the same time and date, so when I read the new appointment I initially thought this was the same thing. And then I checked the original date again, and realised that no, this was a genuine shift of date and time,

So why, then, did this appointment time ring so many bells? 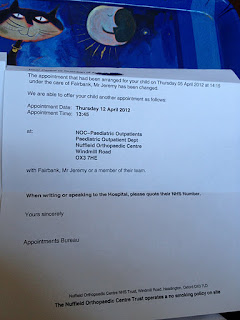 Shame; for a brief moment it appeared that I would have two children having appointments on the same day with the same consultant. It was very nearly joined up thinking...

Email ThisBlogThis!Share to TwitterShare to FacebookShare to Pinterest
Labels: hospital

You wait. Tommorrow you'll get the letters changing them again, but putting them the other way round!

Close, but no cigar!
Would have been nice to have both girls done and dusted" on the same day.