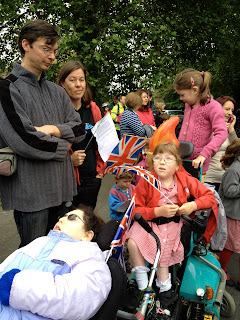 What possible reason could so many people have to be up and on the streets at 7AM on a school morning? 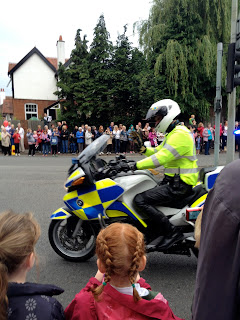 Police out in force. Ignore the nicely polished children in front; they and their parents seemed incapable of understanding "Please don't stand in front of my girls; they can't see anything when you do" 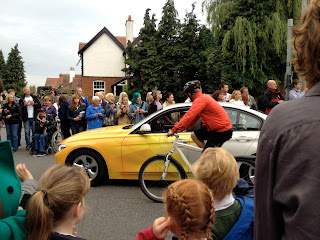 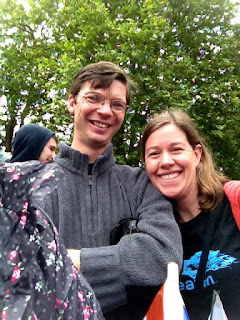 Recently repatriated and reasonably strange themselves. 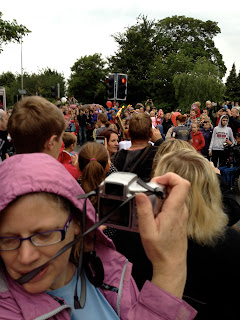 Don't blink; you'll miss it. Up at an unfeasibly early hour, stand around in the light drizzle (so refreshing), be fleeced for a couple of pounds for an annoyingly shrill whistle, and join in the jubilation and celebration as the Olympic Flame passes through Our Town.

It is there, in that photo. Under the traffic lights. Friend in pink valiantly attempting to hold back the hordes who decided stampeding the girls was an acceptable thing to do - I'm considering fitting Boadicca-esque blades to their chariots. This for her:

Still, the flame passed, the hordes surged on; we marched home for extra raincoats, on to church for a quickish cup of coffee ("This is my second breakfast today" said one of the cousins, admiringly), and then round to the Little Princess' school, for a third breakfast of more bacon butties, and a whistlestop "This is what an English school looks like" tour for the cousins. 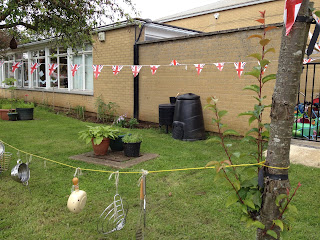 Royal Jubilee, football, tennis, and now the Olympics; rarely has one summer held so many opportunities for flags and bunting and general jollilities of the English and British varieties. I'm sure the weather is merely doing its bit to ensure we maintain our green and pleasantly boggy land in tip top form for all the festivities.