Ann asked what kind of ultrasonic rodent repellent I had bought. I'm being lazy and blogging on my phone, so no pretty linky thingy, but here's where I bought it http://www.primrose.co.uk/pestbye-advanced-rat-and-mouse-repeller-whole-house-p-36.html?cPath=24_1178&src=list_img.

Not hugely expensive, and your money back if there's still a problem after a month. Can be switched to a different frequency to deter spiders and creepy crawlies. But - will affect gerbils and hamsters and other small pets, so they'd have to be moved out for a while.

I can't hear it, the girls don't appear to be conscious of it, and the cats are completely unphased (don't buy the cat repellent one by mistake).

The first night it was on, I could definitely still hear scrabblings. But after that, nothing. PestBye warns that it can take a month to get rid of them completely, as if they are sitting on a nest, they won't shift until the babies are old enough. I'm thankful that there were no babies here; I guess they just needed the extra time to pack up properly and make extra sure they had defecated thoroughly on absolutely everything within reach.

My flat is L shaped, one L being an extension, which is on a different ring main. I was pretty sure, when we found mice stuff in the bedrooms, that they had not ventured into the playroom and sunroom, at the opposite end of the L. They had. On the off-chance that the device was only working in the older part of the L, I ordered another one to plug into the newer bit. I'm not sure this was necessary, but I wanted to be very sure there was nothing living there by the time our houseguests arrive next week. I'm now confident we are rodent free, with the handy bonus that the device has a nice gentle nightlight. Rodent and nightmare repellent combined! 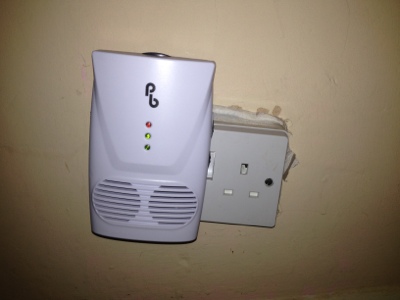 Thank you so much, Tia! I'm just about to begin dinner prep (I am in Virginia, USA), but plan to head right back to the computer after washing up, to check out this device. Again, thank you for sharing the info! Hope the nasty little things are gone from your house for good - they sure did a lot of damage in ours!

thank you very much for your kind comments!

Really happy you managed to complete your mission in the short time!