Fun at the fair

Ask tLP, and she rode six rollercoasters, ate all the food in all the stores, and won every game there was.
Further questioning may elicit the admission that riding the snail on the galloping horses merry-go-round might just have been more like it.
Mog was happy this year to watch and listen, but still enjoyed being a part of it all.
No goldfish here, but one rather fabulous purple grape-scented bouncing ball. Which bounced beautifully for the rest of the evening, and bounced beautifully all of the next day. It bounced around the sitting room, releasing scent and causing much squealing.
"Don't take it outside," I said. It went outside. "keep it on the grass," I said, "It will burst if it hits anything else. It's an inside ball really."
Two minutes later, two sad girls handed me a pile of purple plastic. "I told you so," I didn't say. And that was the end of the fair for this year. 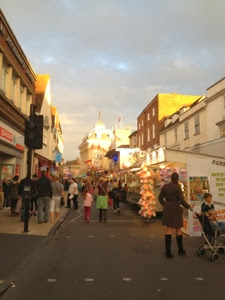