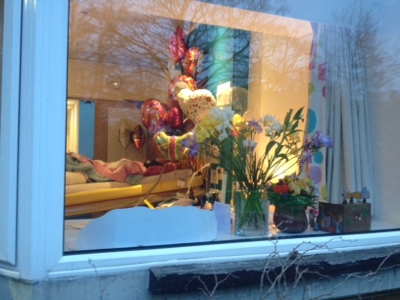 Thank you for sharing your thoughts.
Constantly in my thoughts and prayers xx

Wrapping all 3 of you in love and good thoughts.

As Tina said, thank you for sharing & you care constantly in my thoughts xx

Beautiful words for a very special young lady. You all are constantly in my thoughts and prayers.
Much love to you all.

Thank you for sharing this last precious moments with us all. Your words remind us all of the love that should surround everyone especially at this time of year. My family and our wider church family have you and the girls constantly in our thoughts and prayers as you all spend you finally days with a very special young lady. To imi meet you maker with you head held high and fly free as a bird. The Lord made you brave and strong and you show how much you love him by having no fear to finally meet him. May you pass in peace and when ready to go and may you family know that you did so with pride in you heart to see the Lord our God.

More hugs from us. Rick Beckey and our girls.

The pace and volume of your time with Imi come across beautifully here. Thank you for keeping us informed. It matters. It's not an imperative or a priority in the world, but it matters to me that you are making a way through this.

Praying for peace throughout your every day. Christmas with you or Christmas with her King...I can imagine that would be a hard decision. I'm sure she will surprise us with her choice...she has always had such an amazing sense of humor and timing.

All my love xx

With you both in our hearts. K xx

I have tears in my eyes as I read, thank you for sharing this with those of us who have followed your life with Imi and Amana through your blog. I am very glad that your family has Helen House at this very difficult time.

Tia,
i know it must be difficult, but thank you for sharing with us, we can pray intelligently. Praying that God will keep you ever closer, and draw Amana to trust Him, in these very difficult days.
God bless you all Pat

Sending much love and light to Imi, Amana and you, and also to the others who love Imi very much, and the wonderful crew at HH.

Thanks for sharing this. We were wondering each day how things were. Good to see that you are at peace within yourself Imi, and as pain free as possible.
We are thinking of you all daily

Beautiful words at a very difficult time. We are thinking of, and praying for you all Tia.
Love Emma, Toby and Jessie.

Sending love and peace to you. May there truly be comfort and joy at this Christmas season.

The Hire a nanny Melbourne is something new that has come to the market and it is important to hire services that are all safe and easy to use. There are many Nanny share Melbourne coming up or available but it is always important to hire the best of service providers with whom you can afford to provide all possible solutions at an attractive rate. They are all safe and secure to use at home.