Reason number 3751 why I am often running late. 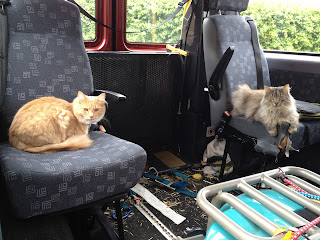 I can deal with the instant affection, winding round the legs and begging for fuss which occurs whenever I stand up and make for the door.

I can dismiss the sixth sense which somehow informs them when I am about to get up, and ensures that at least one cat will land on my chest, purring into my chin.

We've even found a way to overcome Benjamin's habit of throwing himself down on the ground, on the lintel, just in front of the Little Princess' wheels, thus ensuring she can't move forwards or backwards. Since I can't squeeze past both girls when they're lined up in the hallway ready to go out, we now have a long poking stick. You'd think the threat of crushing by 125kg tank would be an effective deterrent. It's not. A couple of prods from a broom handle will eventually persuade him to amble a few steps further down the ramp; not enough to get past but at least enough to shift the girls gently so I can grab him and peel him off the concrete.

Two cats lying around each other on the concrete ramp produce a beautifully compelling yin/yang effect, although thankfully the effect is very short-lived. Sniff, sniff, kiss, kiss, rub, rub, and then BounceHissSpitWalkAwayQuickly. For the cats are only nearly good friends. Allies, I think, rather than soul mates.

And this is now their latest "Don't leave us" trick. Into the bus as soon as the doors are open, settle onto the seats comfortably as I clamp the girls in, and then dive under the chairs, safe in the knowledge they won't be run over. Have you any idea how hard it is to remove two furry felines from the far crevices of the car, with speed enough to ensure that the first has not performed a rocketlike re-entry during manoeuvres to remove the second?

We've got a dog that does the same! If he is allowed to 'come for the ride' he has a bad habit of trying to nudge your hand for a stroke and/or putting the hazard lights on or putting his foot on the gear stick! Haven't found a solution yet either other than train him to drive properly and enter him for next year's Britain's Got Talent!

LOL--I know it's probably not funny for you--but it is amusing and fun to see how cats do respond to us and their surroundings. We have one that likes to get on Alissa's face or closeto it at night when she is getting settled in bed.--Thus earning himself a one way ticket to the basement for the night. I am not very tolerant of animals interupting sleep--especially the kids sleep.