As tLP went back to school and prepared herself for the Big Event yesterday, Miss Mog had her own excitement. A reprisal of an earlier role, but then she does look rather dashing in blue, I think. 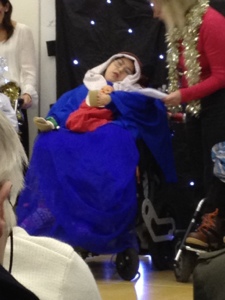 She was in respite the night before, and much consultation had happened between the various authorities as to the necessity of having her in school by 9.30 rather than her usual 10AM. Despite this, her transport did not turn up at respite until 9.26. The show started at 10 as planned, and those of us aware of her absence scanned the programme anxiously, willing other classes to move slowly, hoping the comperes would drop notes and slow things down.

They didn't. The school choir made a joyful noise (and will be featured on local radio on Saturday morning. The sixth form narrators read with enthusiasm, and the classes paraded on and off stage to sing and dance and play their instruments and wave to parents. Beautiful.

Despite the lack of hiccups, Mog did just squeak into the hall in time to join her class, who were singing the Calypso Carol. Phew! I think that's what they sang last time she was Mary, back in the nursery. The wise man that time has since transferred schools, as has the angel. The shepherd is no longer in Mog's class, so she had a new backing group (their parents may choose to see their roles slightly differently) this time. I made Mog's costume from a pillowcase last time; can she ever have been that small? 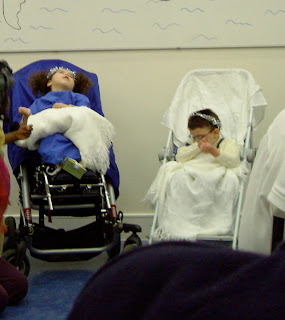 This time, as the grand finale, nearly all the pupils were able to crowd onto the stage to sing their final song and wave their last "Hello Mummy" waves. So nice to see everyone together, from the tiniest wobbly dot in the nursery to the very elegant and sophisticated sixth formers (who then served tea and coffee and fleeced us sold us the fruits of their labour over at the Propeller Project.

It takes a lot of work to put on a school performance. It takes even more work to put on a performance which is meaningful to all the pupils involved, including those who don't manage well with crowds, who cannot sit still, or who can do very little other than sit very still. To create a show where every single pupil's input was valued and appreciated was very very special. Some pupils had recorded their input earlier to reduce the overstimulation, some had clearly practiced very hard, and others brought some beautiful inprovisation. All clearly enjoyed themselves, as did the audience. Well done!