Fourteen years ago this week, I was making cheese and potato pie to a recipe from the cook at a local children's home.
I was shuffling mountains of easy care clothing (all from one shop, mostly one style in various assorted colours) into suddenly too small drawers.
Working out how best to fit everything into the lift at once without tripping the sensors. And learning where exactly to leave the hoist so the cabling didn't strangle me.
Saying goodbye to a breathtakingly beautiful boy who had shared my life for the past six months, and opening my home to a tangle octopus of a girl, with long dancing fingers and a habit of partying most nights.
Out with the dungarees, and in with the hair bands. Out with the puddle jumping, and in with a wheelchair. Out with Teletubbies, and bring on the Three Little Pigs. And Elmo. And a large extended family.
Imi is now the same age as Goldie was when she moved in. And this week, Imi is the same weight as Goldie was once she'd had a few months of eating my own version of cheese and 'atato pie. And choc-oh-late cayke. And chips. And oranges and raisins and the corners of more Ladybird books than you might think existed.
My great big Goldie was in fact substantially smaller than Imogen when she was the same age.
Goldie lived with us and shared our lives for just half of these past 14 years. Today, Amana has been with me for the same length of time that Goldie lived under our roof. And Goldie has very nearly been gone for more time than she was with us.
Seven years go this week, Goldie moved into her own home. A bright new future, with 1:1 staffing so she could lead her own life, be independent, go out and do things she was interested in doing, be entertained, and busy.
We visited daily in those early days. Taught staff how to make cheese and potato pie and porridge and crumble and custard and a cup of tea at just the perfect temperature. Trained staff in the importance of always having batteries for Elmo and how to avoid the books being eaten and why it was important to keep reading the stories.
Today I cleared out one of the darker corners of Amana's bedroom. And two forgotten Elmos lay staring up at me, wide mouths silently shaping the ABC song, always and only the ABC song. One plus and shiny, sourced from eBay at huge cost, ready to replace a failing one once it had been chewed to death. And one ancient and beloved, singing stomach removed (that'll be the insert on the top shelf in the sitting room then, waiting patiently still for the new batteries which were never needed.
Elmos, always. 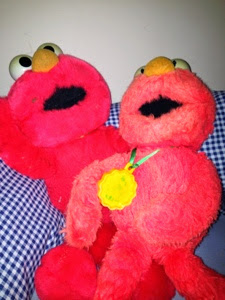 Fourteen years since I first spent a night hearing Elmo sing his ABCs whilst a small girl rocked her bed until I moved it away from the walls and willed her to sleep.
And seven years since she last needed his comforting sameness.
Posted by Tia at 21:44