Two blends today. First breakfast - 200mls milk blended up with a small apple, a small banana, six almonds and 25g porridge oats. Add a spoonful of black treacle (molasses) and enjoy. Actually, in the interests of honesty, make that slightly more milk, a large banana and an average sized apple, then divide the spoils so Mog has 450mls and the Little Princess 150mls. But the values here should be roughly Mog's. 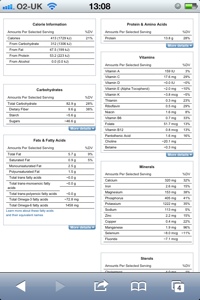 Mog took the second serving of yesterday's egg mix into school for lunch, as usual.

Tonight's blend, chilli chicken. 150g skinless chicken breast fillets, roasted in a tablespoon of rapeseed oil. One raw banana pepper, one raw courgette, two small clementines, and a large cup of quinoa with bulgar wheat. I blended it up with 300mls green tea, partly for the antioxidants, and partly because I thought it was her usual fennel and dandelion one. 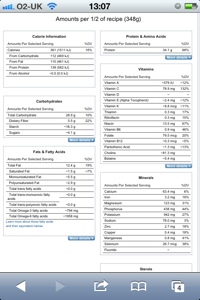 Again, two servings; one for tea tonight and one in the 'fridge ready to take to school tomorrow. 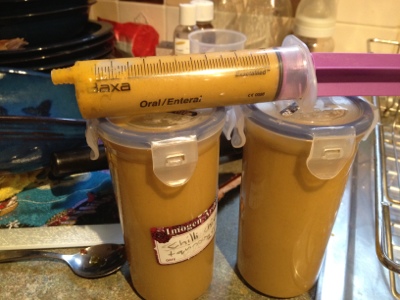 These pots hold 430mls each; I usually have an extra 60mls so she has 430 for lunch and 490 for tea. Mog's lunch is generally warmed and thinned by adding up to 100mls of hot water; not necessary with tea when the blend is fresh. We then flush through with another 60mls water. When we started bolus blends rather than pumped formula, Mog would tolerate 200mls over 20 minutes, with a break in the middle. Now she will take 500-600mls in around 5-10 minutes and is very happy to do so.

In addition to this, Mog has 150-200mls water with her morning and evening meds, and at 11 and 2 at school. If she's been swimming, or has had a lot of seizures, she may have a yoghurt or bowl of fruit puree to give her a bit more energy.

Please note the values in the nutritional breakdown aren't exact; I can't always find the identical ingredients. So the values for tonight's supper are based on straight quinoa, rather than the rather delicious mix of red and white quinoa with bulgar wheat. They won't be that different, but quinoa is slightly higher in protein than wheat. And for some reason nutrition data is acknowledging the presence of vitamin D in her blends but not estimating quantities. Oh, and it's only letting me use skim milk, whereas we use semi-skimmed (2%); the only 2% option on the site insists on having added Vitamin A and "non-milk solids". I don't want to think about what non-milk solids might be being added to milk, so I'm hoping that's a US thing!