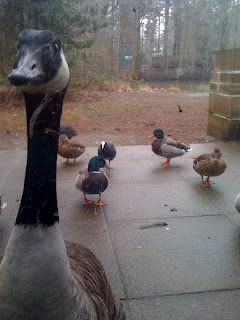 Sitting peacefully yesterday morning, I was surprised to hear an insistent knocking at the back door. I turned around, wondering who might be disturbing us and why they hadn't come to the front, and found this posse! Headed up by the goose, they were demanding their breakfast. Whilst the lesser birds were happy to gather their largess from the ground where it had scattered, sir goose here had finer ideas and honked and tapped insistently until I allowed him to take his share directly from my hand. Later, we pushed Mog outside with a pile of crusts on her tray, but none of them were brave enough to try that.

It's not many places you go where the shops are signposted retail therapy. Still, we made the most of it, and Little Fish is delighted with her new fleecey top. Mog had a quick look but decided to conserve her energy for swimming later.

Home for lunch ("No, Mummy, not home! It is our 'oliday 'ouse), and then Sister Act for the small ones as we larger ones digested our dinner. A swim - Mog wanted just the warm salt pool today, and Little Fish wanted just to be wherever I was, and I needed to be with Mog, so we all had a nice long floaty soak. And then showers - and many evil thoughts for the faster people who kept diving into the free showers in front of me as I stood with Mog on one hip slithering towards them. Only one disabled changing room being used by families who believe having young children is a disability (I can understand this when the accessible room is the only one big enough for more than one person, but here there are at least a dozen large family changing rooms together with more general mixed changing and even more single sex changing. There are only two disabled changing rooms and they're the only ones big enough for wheelchairs. Please leave them alone!) so we slipped into the other and dried and dressed and discovered the entire afternoon had disappeared.

Fish and chips for Little Fish with drinks for the rest of us, then home and two girls bedwards followed by a takeaway for the rest of us. It's an interesting takeaway; jointly Indian, Chinese, and Pizza. We had pizza on Monday, Chinese last night. It was alright, but I am considering coming back here just for the pizza, so if anyone's taking notes, go for that!

Mog's new feed pump started screaming with an F-05 error. I'm not losing six hours out of our holiday to get a replacement; I've stuck it on charge and hope that'll sort it. We did bring the spare back up, but I'm scared to try it - 7 pumps in less than a week feels excessive.

And now I must go and start the day. Sleeping children, sleeping friends. Beautiful. But feeds and meds need sorting anyway, and the geese are gathering outside the window.
Tia
Posted by Tia at 06:57

The girls got a giggle out of your goose - how funny!!

Wow, a lot of feeding pumps in one week. I thought we had it bad. What sort of pump are you having trouble with?

Oops, the above comment was from me, not Jered. I see he was signed in on my computer....
:)
Michelle & girls

It's an Abbott Clearstar Companion (Ross in the US I think).