When Monty Came to Stay

Little Fish's class have a mascot; Monty the Monkey. Monty gets lonely at school when all the children are gone, so he takes it in turns to come home with different classmates. Last term he visited all the children in order; Little Fish was the very first to take him home. This term he is visiting children who have done extra-specially good work. And today he came home with Little Fish again. 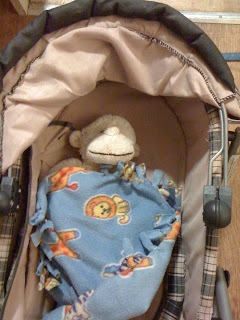 Monty has a diary where he records all his adventures, and by all accounts he's been having a pretty exciting time of it; building snowmen, going to the theatre, playing on computers, going out for pizza, staying with grandparents, getting stranded on snow days.

Tonight he's done none of that. Little Fish carried him home carefully, waving him at all her classmates and saying "Now, children, no one can take Monty acos he is coming home with me." And then proceeded to toss her doll out of her pram, tuck Monty in, and tell him he was a tired monkey and needed his rest.

And that was that. Monty has been lying in the pram; he's had a ham sandwich waved at him, and been outside for two minutes, but apart from that, it has been his job to sleep and our job to keep quiet, but not too quiet, to let him get his rest.