So today Mog's feed pump decided to die on us, thankfully not until we were in the checkout at IKEA but still leaving her without feed for the hour's journey home. Got home, unloaded the girls from the bus, and went to swap Mog's pump for Little Fish's pump which was waiting, fully charged, for just such an emergency.* And discovered that Little Fish's pump not only had a wonky battery cover, something it's had for a while, but also had a big crack across the bottom of it.**

So, I phoned the company which supply them. Spoke to the chap on duty, who agreed that Mog's pump needed to be replaced (F-02 error, for those with similar pumps), and told me I must not under any circumstances whatsoever connect or attempt to switch on Little Fish's pump with the cracked housing. Took my number and promised to get someone else to call me back.

Meanwhile, Mog still needed feeding, so I was pumping her feed through manually , trying (but failing) to keep to a slow and steady rate roughly equivalent to the 105mls per hour she's used to. An interesting task, especially when combined with our more usual evening activities - getting girls ready for bed, sorting the house, detangling the cat's neck fur...

Pump service access woman called back and suggested I tried the cracked pump, as "it probably wouldn't do anything". I suggested this probably wasn't the best plan, given the first chap's absolute veto, and she agreed to send out replacements.

The replacements have just arrived. Bizarrely, the delivery chap decided to drop them off with my neighbour and post a piece of card through our doorway telling me he'd done so. I manageed to catch him; he managed to retrieve the two cardboard boxes, and I swapped them for the two defective pumps.

He left, I closed the door, and opened the boxes properly And lifted out this pump 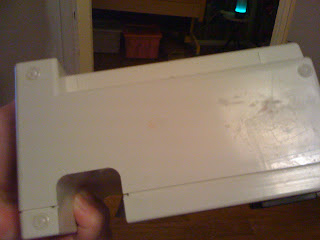 With what appears to be a light coating of grot on the base of the charger, although the pump itself is clean. 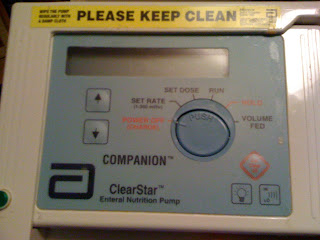 Which is rather less clean. 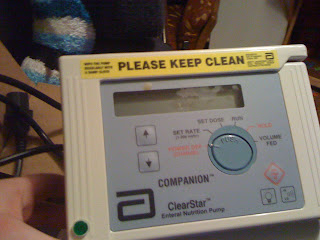 Which is quite revoltingly filthy.

It was nice of them to send three - I'm assuming that's one for each girl plus an official back up incase we need it in the future. But I really hope they have actually sent fully working pumps, not just the first three they found in the cupboard which have been sitting waiting for repair themselves. I'm not convinced that a fully serviced pump would still be covered in milk drips though.

I've just turned them on. The first pump is set to deliver at 133mls/hour and has a dose set of 400mls/hr. The second is set to deliver 500mls at 166mls/hour; it has already delivered 32 mls of that, and is beeping low alarm at me as soon as I turn it on. And the third has a dose of 400mls to deliver at 60mls/hour. Since one of the more annoying features of the newly serviced pumps is the fact they are set to deliver 0mls at a rate of 1ml/hour, I'm thinking these are quite possibly not in fact the right pumps. You know what? I hope these aren't the right pumps - I don't want to think that a company, delivering medical equipment to extremely vulnerable children and adults, simply doesn't bother to clean them first.

I'm off to charge all three of them, and hope that one at least will do the job for us tomorrow. Pass the Dettol.
Tia

I've just set the third and final pump up, having spent last night scraping someone else's lactulose and epilim off the charging unit. No alarms yet.

UPDATE 2PM. I phoned the company who were apologetic and assured me there were failsafe procedures designed to prevent this ever happening. I can't help feeling they're not actually failsafe if they managed to fail, but there we go. Apparently "the courier must have picked up boxes from the wrong side of the depot." I'm not convinced that's failsafe. The third worked long enough to feed Mog until the replacement pumps turned up just now, two shiny clean pumps in shiny clean boxes, fully charged and with nice shiny paperwork. Much better.

*For I am, just occasionally, staggeringly organised like this.

**For, alas, even when I am staggeringly organised, things have a tendency to go wrong.
Posted by Tia at 20:12

I hate to say it, but those pumps look awfully familiar...think they may well be Andys lol. On a more serious note, I am absoutely convinced that Abbott send out any pump they can find, regardless of whether its been serviced or not, when you need one in a hurry. We had 2 fail within 24 hours...a record, even for us.

I really hope they work for you...but a little word with Abbott required on Monday I feel.

I would expect nothing less than an email of complaint waiting for the account manager on Monday morning asking why they are supplying such unhygenic equipment.

Having said that I hope you can get at least one working otherwise I can see an extra irate phone call in the morning.
Peter

Oh my goodness! That is just gross! Then they even have a sticker on them saying please keep the pump clean!!! What! So deliver it clean. Had they already been serviced I would expect that they had been cleared too! Praying that at least one works until you can get replacements.
I had thought that they wern't using these pumps anymore. Maybe we are sending them from the states to the UK!
We no longer use these here.

LOL! No no one of those HAVE to be Jophies! How funny is that Tia? We jinxed both our pumps in a few days time...haha Jophie has a brand spankin' new one(So they say) It DID come in a box and the driver DID produce papers that "appeared" to be ones that would come in said new pump package. So far it's running like a new one but I predict after this conversation Jophies new pump and your three will die simultaneously together! LOL
Talk later...
Hugs,
Trina and Jophie

Forgot...I will say I DO LOVE this pump and was thrilled they were able to get a new one for us! So easy peasy to pluck that little box out and shove it in my purse and go if need be...

That is terrible!! I think I would be tempted to throw those pumps at the supplier... no wonder they hide behind a phone!