Because it is, ultimately, all about me.

A new kitten is a great way to occupy a week or two. Throw in a poorly child; nothing majorly wrong but just "Not Right", and there's a beautiful distraction from the fairly major surgery planned for child number two. 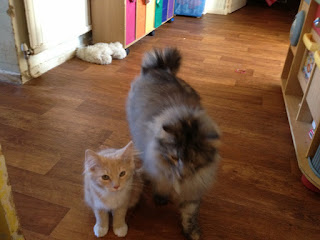 But there does come a time when, no matter how cute the kitten, the headline news on the radio is that patients admitted to hospital on a Sunday are 16% more likely to die than if they are admitted on a Wednesday, including planned admissions, and the "la la la I'm busy, can't hear you" stops working, and you realise you are in fact heading that way in just two days' time (and yes, going in on the Sunday). It is, however, significantly better than the outlook this morning, when I misheard 16% for 60, and was considering calling the whole thing off.

I could drive myself mad wondering whether there really will be a statistically significant difference for the Little Princess between our Sunday admission and our originally planned Monday admission, but ultimately it's out of my hands, and I either trust the staff (and God) or I don't. We're going in.

But, in the meantime, if the sight of a very confused little kitten trying to suckle an equally confused neutered adult cat isn't distracting enough, then I have a lovely bag of yumminess to explore. 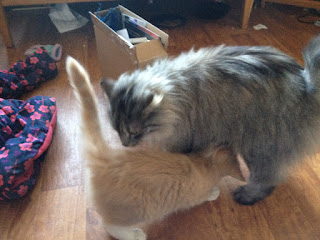 It occurred to me, in one of those pre-dawn-ugh-I'm-not-awake-back-off-world moments that there may well be a considerable amount of down time over the next week. We'll be aiming to keep the Little Princess nicely comfortable, and that should hopefully mean a fair bit of her being asleep. And then of course there's the op itself on Monday when I'm absolutely certain she'll be unconscious and there won't be a great deal for me to do, since for some reason they don't seem to like parents to be involved in the surgery.

And, with a new kitten in the house, crafty type stuff is having to be on the back seat - pretty photos aside, cats and knitting just aren't a natural combination. Hmm, a cat free week; what can I do with that? Legitimate knitting googling; hurrah!

I found myself here (warning: link could be hazardous to anyone keen on rather splendid wool). Free patterns, marvellous! Free patterns for some extremely delicious fair trade hand dyed gorgeously textured ouchily pricey wool. Hey, it's Fair Trade - buying it is a Good Thing, yes?

Just one problem; hospital admission on Sunday, and today is Friday. Our local wool shop doesn't stock the right wool for the pattern I've chosen (although it does stock the silk and lace yarns, check them out!). I call an internet supplier. No problem; they can arrange a delivery for Saturday. Small problem; they don't have the colours I want in stock. I take a look at another site and decide I don't actually have time to arrange a second mortgage. I check a third; equally ouch. I call another supplier, Yarn Box. Handily, Nicola is about to sort out the day's post, and will pick and pack my wools as she does. Even more handily, Yarn Box turns out to be based very locally, and she will drop the yarn round herself - now that's definitely service! And here it is: 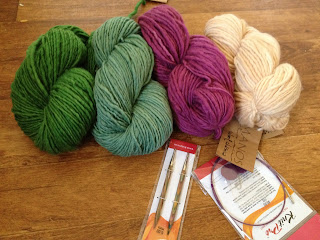 Pattern downloaded and printed, needles ready and waiting, and it is only the kitten lying on my lap playing with my hair which is preventing me from making a start already. Roll on Monday; I'm almost looking forwards to it now!

Hope all goes well for your Little Princess, and that your knitting goes well too! That yarn looks gorgeous - do show us the finished product!

Oooh! THat wool looks gorgeous! What's the pattern?
I will be praying hard over the coming days
C xx

Sending up arrow prayers for LP, I've been admitted twice on a Sunday evening for planned surgery,and I'm still here! I doesn't give nurses much time for prep on a Monday morning. Incidentally, why do the nurse, doctor, and anaesthetist all ask the same questions?

In my prayers, I'm sure the Sunday admission headline is aimed at the emergency admissions. I know for fact you don't want to break a bone at our local hospital on a Sunday as you have to wait for an X-ray till Monday.

I'm looking forward to the finished project, you are rather talented.

Good luck to Little Princess. I hope it goes well.

Hope all goes well for tLP.

Thinking of you all and tLP especially, may the op go swimmingly and the recovery be rapid and uneventful. Praying for her and all of you.

Thinking of you today, hope all goes well xx