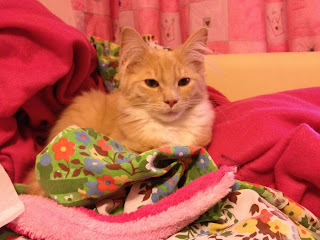 Benjamin has discovered that beds are soft. 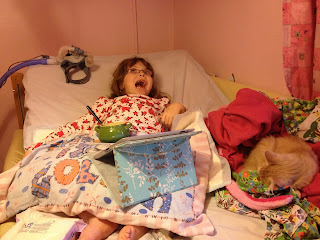 And small children are having to fight for ownership. 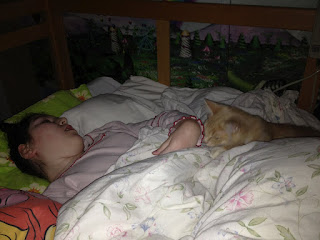 Unfortunately we are still working on minor aims such as wrists, however contracted, are rarely if ever considered acceptable fodder, and that tubing for Nippies and CPAP and SATs monitors etcetera are not toys. 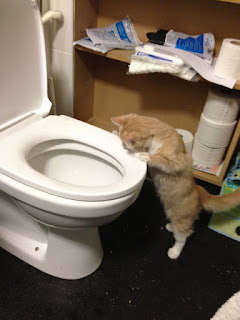 He has created for himself the role of flush inspector 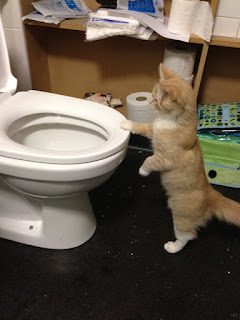 which is slightly more acceptable than his other roles of toilet paper shredder and cat litter spreader.

Grolly is mostly unimpressed, but has decided he must be washed at regular intervals. This she does, when not otherwise engaged in making herself too fat to fit through the cat flap. The two of them almost nearly snuggle together at times. Grolly has forgiven me for bringing in this intruder and begun to sit on my chest again. She doesn't do laps. This would be ok, if it weren't for the fact that Benjamin has decided under the chin is his own personal spot. Two large fluffers sitting on my lungs mean no photos of them together. Fortunately it doesn't last long before Benjamin remembers he needs to jump on Grolly's head, and she remembers that she needs to pin him down for another Serious Washing. After which she squeezes herself out through the cat flap, pauses to jeer at him as I close it off to prevent him following, and settles down in the garden for a nice therapeutic round of hunt the leaf whilst he takes comfort in chasing one of her pieces of fur around the kitchen.