We're a sociable bunch here. We eat out a lot, especially on holiday.

For years, this has meant that we've booked tables with "there will be four (or eight or ten) of us, two in wheelchairs, and she doesn't eat." Miss Mog has very happily either dozed as the rest of us eat, or stuck her tongue out for tiny tastes of whatever smells best at the table.

Since moving away from formula onto blended table food, this has changed a little. Instead of "and she doesn't eat," we've bought her a meal and brought it home to blend for later, whilst bringing out her preblended meal and asking for some hot water to warm it through. Nice, inclusion at mealtimes, the chance to choose from the menu with the rest of us, and eating at the same time as the rest of us.

Today though, for the very first time, Mog got to do what her little sister has been doing for years now, and what most of us take for granted whenever we eat out. She chose a meal, and ate it there and then with the rest of us.

We brought the blender with us, but the restaurant chose to use their own. There was no hint of surprise on the waitress' face, and the only only questions were what did we want it blending with (answer: the cranberry juice she'd ordered), and did we want it served in a bowl (yes please).

And that's what a blended diet is all about really. Real Food at the right time, the same as everyone else.

And for those interested, Denny's Spinach with Pico de Gallo and Bacon, with Cheddar Mash, blends down beautifully and would make a soup fit for anyone.

A lovely new first for the end of the holiday - and Mog, I'm sorry it took until the last night for us to think of asking. Next time...
Tia 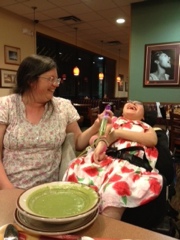 That is just so fabulous! Mog, thanks for the recommendation for our next trip to Denny's. :)