Comments from the weekend.

Mog, showing off her new chair.
Great Grannie, looking at the various bolts and meccano-esque pieces "Can you get a 'fridge and cooker installed on that?"

7 year old cousin, on being told not to call her brother names, even if it was "in the game;" "Then I'm going upstairs to get away from He-Who-Must-Not-Be-Called-Names".

Oh - and since family stuff probably isn't terribly interesting to anyone not family, here's a very rare picture - two cats in harmony having just spent the week in very close quarters. It won't last; in fact they're already both rooting for new spots. But in the meantime, cuteness abounds. 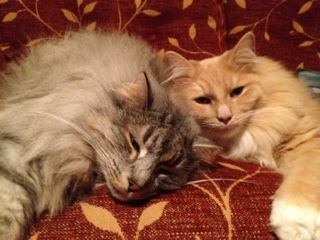 lol enjoyed this post Needed something to smile about.
Debra