Another day done. Numbers nationally and worldwide incomprehensible; news now needs to be switched off for A's peace of mind, which is probably better for me too. To quote the teenager formerly known as Little Fish "We just need to get this whole coronavirus thing finished and then I need to get back to school." Yup, that's all. I'll get right on it.

She spent most of today writing a script for a new Friends Episode: The One Where Amana Visits. I'm impressed; careful use of large font and it's now five pages long, although I cannot convince her Joey would be more likely to say "How you doin'?" than "Hi guys how are you all?" Still, she's arrived, Monica and Rachel have gone shopping, and she's headed over to Central Perk with the rest of them to meet Gunther.

Someone told her it's possible to duo Friends tours of New York. Not now, obviously, but I think she's making plans for a very very expensive trip at some point in the future.

Today we tried to open a bank account for her. After having been assured we could do everything online, we were stymied by the first bank's insistence that we just "pop in" to the branch for the final checks. Nope. Next bank, my own bank, locked me out of my own accounts four times in half an hour, before conceding I was who I said I was, accepting the relationship, but then refusing to allow A's passport to be acceptable photo ID. And requiring further photographic proof of identification, helpfully suggesting a driver's licence. For a 15 year old. Helpful. Not.

But still, we nearly managed to open the account she's been waiting for for a couple of years now. We nearly completed one piece of schoolwork whilst the boy napped. And I nearly managed an entire row of crochet. I did manage to take delivery of a replacement slide for the climbing frame, disinfect it, and screw it all into place and tighten up all the other screws which seem to have worked slightly loose with use. So that's something. And there will always be tomorrow for the rest. And tomorrow, and tomorrow, and tomorrow...

We are slowing down. One piece of written work over the course of the day is good enough. There is time to run laps in the garden with my boy, and time to just sit with a coffee as he sleeps (oh yes, that's why we didn't manage to do anything productive during his nap). Time to appreciate the many many tulips waiting to burst into flower, and then sit and watch as one opened and shared its beauty. Time to refill the coffee cup, and come back to twenty open tulips. And time, a few hours later, to see all the tulips tightly closed again, hiding their secrets for another day. Life may be passing us by right now, but time has come to rest here. Pooling around us, swirling around so that at one moment we are all three up and dressed and ready to be on the swing by 7,30, and yet a few minutes later it is time for lunch. 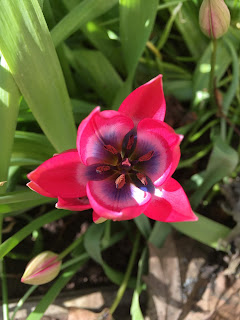 This evening about now, I should be collapsing into an armchair beside my equally exhausted friend, raising a glass to each other for having finally completed the marathon bedtime routine, she having also accomplished the dreaded Friday evening journey 288 miles south to us, both of us ready for our Welsh holiday in the morning.

Instead she is in her kitchen, alone, making suppers for her precious boy, and I am horizontal, alone, writing words on a computer in an attempt to give shape to some of the thoughts spiralling in my head. Our girls zoom daily, but it doesn't compare. And yet, what are we being asked to do? Just to sit tight. We each have accessible houses with decent outside space. We each have the internet, local friends to help out, and the all important Vulnerable Family Sainsbury's delivery slots. If this is war, it is a very strange kind of war, or at least our part in it is. We are shielded, behind an invisible barrier, 2m wide, and are least likely to be infected by this unwelcome invader With friends and family who are genuinely putting themselves at risk multiple times per day, in order to help others and keep this world going, merely being asked to step outside the world for a while should not be a big ask. A friend mourns her child. Another nurses her husband. And I grumble because I'm missing a holiday and a bit of company.

I switched the news off days ago. None of it helps maintain peace and even-ness (if that's a word) of mind.

I haven't been outside in 2 weeks (because I'm an asthmatic) but that only mattered this week when people I knew started getting dangerously ill. I now know 12 people who probably have, or have had, COVID. (I say "probably" because only 2 have been tested). Only 1 had to be hospitalised and he's since been discharged.

I know these restrictions are necessary, but they're hard to live with when people you care about are getting sick and you're worried about what may happen to them next.

And you're right; all we have to do is stay indoors where I at least live in ease and comfort. I know NHS key workers who are running real risks in what they do, so I shouldn't whinge. I'm trying to count the positives and be grateful for what I have, which is much more than many people have. It shouldn't be as hard as it sometimes is.

What a clever and creative young woman, A is! I've heard that they have been considering a Friends reunion - A should send them her script as they might incorporate at least part of it!

Ooh, I just did a search for "virtual tour of Friends sites in New York" and the following two videos popped up! The first is of sites, the second is of the designer of their apartment. I did NOT view either, so please do so before allowing A to - just in case! I am hoping, though, that A will find them entertaining - and perhaps even helpful as she continues her screenwriting project! At the least, it might also tide A over until she builds up enough in her new bank account to take that very, very expensive trip!

By the way, one of my son's college roommates is from Sri Lanka, and he said he practiced his English by watching Friends. I think he knows EVERY word of EVERY episode!

I'm pretty much of a homebody anyway, but am beginning to miss seeing humans after not leaving the house for 3 1/2 weeks now. Is Zoom hard to use? Perhaps I can get a friend or family member to "visit" with me that way.

Zoom is very easy to use; download the programme or app, and then it’s pretty much step by step. If you have someone who uses it already then they can send you a link and you just have to click.

Thank you for the friends links - I’m hoping I can persuade her something a little more local might be just as good, but who knows when we will be back to free movement again?

And M; it’s closer isn’t it? Hard to be so reliant on others, hard to accept that doing nothing is the best option when people close to us are risking themselves daily.