New screwdriver arrived today, so after a crazily long charge, I could finally get on with sorting the climbing frame. Just in time; D has learned how to climb up the wall but can't get back down again. Alas, the screwdriver ran out before I could fasten the slide in for him, but at least the rest of it isa little more stable for him. 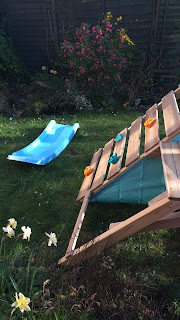 Crazy that I have been able to leave the boxes out in the back garden with instructions and everything else, for nearly a week now and no rain or anything else to turn it into a soggy mess.

A has kept herself very busy looking through her ASDAN home learning options and ignoring them all in favour of downloaded colouring sheets and maths problems.

And much much happiness this evening, D's toddler group page posted a video of his favourite singing lady complete with her real guitar and ability to play real tunes properly. Much applause (his new skill) and jumping up and down, and utter delight that as his world seems to have shrunk beyond measure, some things in it are still out there, even if he has to stare through a screen to reach them.

He keeps bringing me his coat and wellies with an Oliver Twist expression in his face; never in his life have we spent so long at home. Going for a walk at least once a day has been essential for him. I think I find that harder than other things really; he trusts me, he is so very good at communicating what he wants, and I am so completely unable to explain to him why he can't have it. He finds new ways of telling us, and we still say no or fail to understand.

A pause this afternoon, and a virtual coffee with a friend. An hour, she with her peaceful adults only house and uninterrupted chat, me with my toddler begging for a walk and teen grumping if I moved into earshot but shouting for attention if I moved away. Still, it was very good to be able to see her face. To have a conversation where facial expressions play a part, rather than relying on tone over the phone or via messages. Connection. But one which emphasises the difference now as well as the similarities.

Outside, silence. Yesterday we had planes and helicopters buzzing but today, just clear empty blue sky. Tonight the helicopters appear to be back. This world, paused. It is disconcerting.

Proud of D's persistence and of Amana's teenagerdom (as I'm sure you are) How did the rap turn out?

Inco supplies turned up today, evening carers pulled out (we can manage without for now) morning carer still here, thank goodness, but for how long no one knows.

The rap remains incomplete, but it's giving them a huge amount of pleasure to keep working on it, so that's useful.

Very glad your supplies turned up - I must place a catheter call shortly. Not looking forwards to it!