The rain in Spain may fall mainly on the plain, but the rain in Abingdon falls mainly on the madwoman watching her boy splash around in puddles outside once he can no longer be contained within four walls. 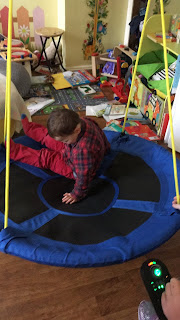 We are waiting for some garden play equipment, but in the meantime Captain Sensory needed some serious stimulation to stop him exploding. Office chair spinning, peanut ball rolling, head squeezing, joint compressions, and he was nearly purring by the time we reached his little fingers. And then we found the best New Thing; tucked away and waiting for a collection which never came, a swing we could sling onto the hoist. One happy bouncy swinging spinning boy and then quietly, one calm and snoozy baby boy. 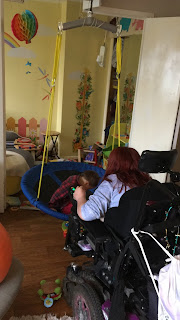 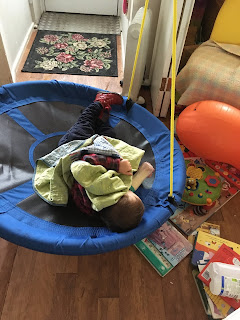 We have nappies! Assorted friends and church people have been scouring the shops, and I'm pleased to say we are fully stocked, tick item one of the reasons to lose sleep list. We also have chocolate spread and ketchup, so my girl's world will keep turning.

And we have the beginnings I think of more formal back up plans. Or at least, we have recognition that plans will be needed. Official recognition from both health and social services that if I am ill myself, there are two very vulnerable children who will need full support very quickly. No idea what that will look like yet but I'm feeling a lot less stressed now that the official bods have acknowledged the fact they are aware of the situation. It's a decent start. Plan A does of course remain stay well and don't break anything, plan B being just don't get too ill.

It's been a long day. One boy partying from 1-4AM; we attempt to refuse his invitation to join him but he's quite insistent. It's a good job he's cute. One girl who is upset to learn that her school will be remaining open without her, whilst other schools close. And who is determined to have the biggest folder of work completed before she goes back. Which is a good aim, except when it means she gets panicky at the thought of being away from her work station, not only between the hours of 9 and 3 but also up until bedtime, because the others will of course be working so hard at school. I'm hoping they might start sending some work out to her fairly soon, so that she can see what the others are doing rather than simply trying to do All of The Things in an attempt not to miss out.

The world has shrunk considerably. I haven't seen most of my neighbours for a few days now. If we are out, they are safely behind their shuttered windows. Fewer cars are coming and going. Our delivery drivers are dropping parcels at the door, knocking loudly then running down the drive as quickly as they can. The meter man came to call today; as he moved up our hallway so we retreated to the kitchen, and then back down to shut the door once he was down the driveway. Echoes of some stylised country dance perhaps? Shrinking, but feeling more normal today.

Verse of the day: Proverbs 18:10 The name of The Lord is a strong tower; the righteous run into it and they are saved (earworm, anyone?)

And song for the moment:

I have been social distancing since Monday evening, as I'm in the underlying health condition category, albeit not a super-serious one like your children. It's been surprisingly difficult to adjust. It's the fact that there's no end date in sight, I think, and that even when it ends for most people, it may not end for me.

I went outside for the first time since Monday today (observing a precautionary 2m distance for my sake and for the sake of others) and was surprised to find that no one else was doing it, so was quite glad in the end that it was only a trip to the postbox. I bolted for home and then wondered when I will next go out, which is odd because I was happy to be outside on Monday itself. I need to find a better route to take where I can avoid people, and they can avoid me. I'm glad (in the nicest way I can be) that people are avoiding you all when you're outside.