This girl told her wish to anyone who would ask. And for a couple of years, her mother promised that one day, she would fill in the forms, and see if the magical people at Make A Wish would make it happen for her. And the girl would roll her eyes, and friends would laugh, because they knew how long Miss Mog had been asking for this.

And then the girl started getting a little bit poorlier, and wasn't managing school very well, and the house was getting fuller and fuller of nurses and carers, and the mother decided it was probably time to get on with the paperwork. That's the back story.

So it turns out, the paperwork is actually pretty minimal. I filled in a single page form, sent it off, and two days later, Make A Wish contacted the hospice to check we were who we said we were. They sent out a slightly longer form, I filled that in too, and then they sent out a pack for Miss Mog, with the request that she choose not one but four separate wishes.

Now there's a thing. It takes a while for a non-verbal child to express four of her deepest desires. We read the newspaper which came with the wish pack, to see if any of the recently granted wishes might take her fancy. We thought about the various categories of wishes. Something to do, something to own, somewhere to go, something to experience. We thought about things she likes, things she might like, things she really wouldn't ever like. And eventually we came up with four wishes for Mog.

Number one wish, to have her haircut and makeover, get dressed up all fancy, and go out to a show with her umber one knight.

Number two wish, to have a nice warm pool she could relax in now she doesn't fit the bathtub any more.

Number three wish, to be able to make music all by herself.

Number four wish, to go back and say hello to Winnie The Pooh again.

OK, four nice wishes, and a girl happy with all four of them. We put them down on our cheat sheet for the Make A Wish volunteers, and waited for their visit.

Mog was a bit busy demonstrating why she qualifies for a wish when they got here at tea time on a Friday. But she managed to agree that all four wishes were in fact her own wishes and not ours. Squeezing time away from tLP, who had her own very clear ideas for her own wish, she had made a decision and told the room all about it.

And much to my surprise, Miss Mog decided against the haircut and makeover, against the time with her number one boy, and instead decided that as it's a bit tricky for her to use her voice consistently at the moment (although fellow church goers might be surprised to hear that), she actually wanted the means to make her own music.


And then we waited. Not very long; whilst we were on holiday, we had a series of phone calls from a very nice Wish Granter, who confirmed Mog's wish, queried tLP's, and said he was arranging delivery for the following week.

And on Thursday, in the fifteen minutes I left the house to rescue Mog and nurses from school overload, the postman dropped a slip through the door. Mog was not impressed. We waited the requisite two hours, then nipped up to the post office, where a rather special parcel awaited us. 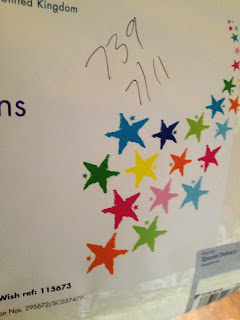 It didn't quite look big enough to be a whole wish, but the contents were pretty exciting anyway. 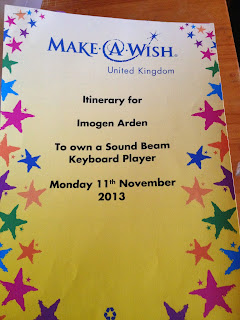 Badges, lapel pins, £30 to spend on a celebratory meal, and a letter explaining that over the next few days, the post man would be delivering something very exciting.

And so we waited. Friday, nothing. Saturday, nothing. Sunday, not a post day anyway. And on Monday, Mog dressed up in her finest, stayed home from school, ordered her nurses to redo her nails and make her hair beautiful, and waited for her wonderful wish.

On Tuesday, I phoned up, and it was explained that Monday 11th was merely the first day of the week in which her wish would be granted, not in fact the day it would come true.

And on Friday, this happened.

It's not the best video, because the best ones are both too long to be uploaded here. But you get the drift. She loves it. She's been singing away with it for the last hour. Feet hitting switches to find a bass riff, one hand to play the tune and the other to hit some harmonies. It's beautiful. 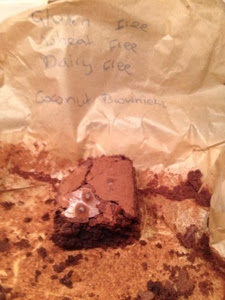 And very delicious.
Melt 5 oz coconut oil in a saucepan with 6 oz plain chocolate. Set aside to cool slightly.
Beat three eggs, add 8 oz caster sugar, then add 6 oz gluten free flour (I used Doves farm for laziness, but have also used a mixture of cornflour, gram flour and rice flour quite happily), 1tsp gluten free baking powder, and a tablespoon of cocoa powder.
Pour in the chocolate and coconut oil.
At this point, add chopped nuts, raisins, coconut shards or anything else you fancy. I didn't; they didn't need anything extra.
Stir until all mixed, then pour into a greased and lines baking tray, about 6" by 8" or so.
Bake in a preheated oven, 180c/gas 4/350f, for 30-35 minutes until a crust is formed and the brownie feels set and not too wiggly.
Cool and cut into segments.
Collect praise from friends with food intolerances.
Tia
Posted by Tia at 20:03 2 comments: