This Is The Day

Browsing blogs the other day, I came across a sentence written by a man whose wife is dying of cancer. I can't find the blog, I can't find the exact quote, but it boils down to "This is the day which The Lord has made. It must be, because I would not have made a day like this."
It stuck. I read it for the first time as the nice oxygen lady came for the last time, to unhook the concentrator from the great long line, to wrestle the giant cylinders from the depths of the wardrobe, to pack up the mini cylinders and the chargers, and to leave me with a hole and a pile of gently used tubing.
I pondered on it as the nice man from Millbrook came to dismantle the bed and heave it into his bus. And as the courier came to pick up the feed pump.
And it came back into my mind powerfully this morning, as I sat in the short pew, in the space beside the gap marked out with gaffer tape on the floor, arms empty and nowhere to hang my bag.
I did not choose this.
I did not choose not to be exhausted by the end of every day. I did not choose to have more space in my house. I did not choose to have an only child. It was not my choice to be able to sit through a meal uninterrupted, to sleep without listening for seizures, to sit at home in an empty house, and for this to be the norm not a special treat. Yet this is the day that The Lord has made.
I did not choose to ache with longing to hold my girl just one more time. I did not choose these empty, relaxing hours. I did not choose this pain. But this is the day that The Lord has made, and I would choose this all over again, because all these exhausting stressful confusing days were so completely worth it.
I would not have made a day like this. I would not have made a day like any of the four weeks since Imi died. I probably wouldn't have made many of the days in the past few years either. But I wouldn't want to be without them.
Hard, but beautiful. Polished diamond days in memory. I remember. Shining bright, and stabbing pain. Hard. But beautiful.
And it occurs to me that I would not have created many of the days we had together. I would not have created days watching Imi struggling to breathe, days counting the minutes between morphine doses, earlier days waiting for surgeries to finish and counting the minutes until we were together again. But they were the days with The Lord made, and they are days I treasure now; times we shared, when my heartbeat child was with me still. Days I would not have edited out of her life, for then her life would have been measured in weeks and months, not the years we were blessed with. 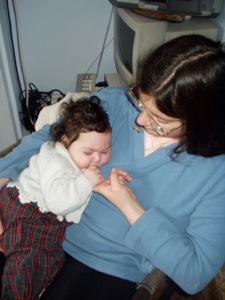 This is the day that The Lord has made. Let me find a way to rejoice and be glad in it. 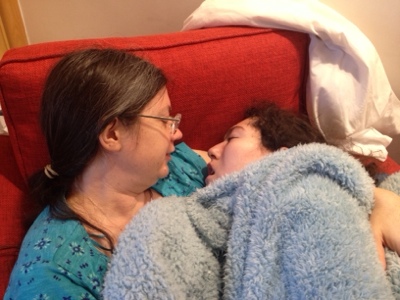 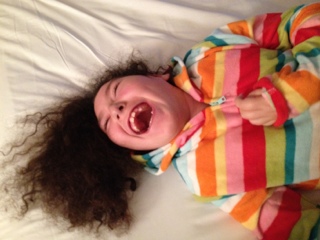 When I first met Imi, she was completely and utterly Little Girl Lost. She didn't know who she was, where she was, what this world was meant to be.

She knew she was hungry, but she struggled to suck.

She knew she was tired, but seizures snapped her body into wakefulness.

And she knew love. She knew that she was safe snuggled into someone's arms, sucking on an adult's little finger with an intensity she never managed with either bottle or dummy.

And so I carried her. For two years, if she was awake, she was tucked up next to my heart, and perhaps the warmth of my body helped a little to lessen the spasms which twisted through her.

Right from the start, we were a part of a team. Her neurologist forever tweaking the balance between seizure control and sedation. Surgeons fixing bits of her body the spasticity pulled out of joint. Physios and other therapists encouraging her body into functional positions. Helen House providing a safe space so we could take time to just be a family, letting someone else juggle the meds and other regimes.

Imogen was a lot brighter than most of us realised. Incredibly limited by her body, she realised language had meaning when she was two. It took her another three years to find a way of making herself understood.

These were her golden years. Happy, small enough to be portable, we took holidays across Europe and Florida, and she loved the warmth and the attention. Roller coasters, cable cars, mountain railways and feeding dolphins.

And illnesses. Prolonged seizures and spasms contorting her body into painful asymmetry. Chest infections from which she never quite recovered, each one leaving her a little bit weaker, with more breathing problems.

Finally, two and a half years ago, she had the illness I think of as her tipping point. She lost her laugh. Smiling still happened, but it was hard work. There was pain. A lot of pain. School became too much for her, crowds overwhelmed her, and despite the morphine, she began spending longer and longer in bed.

She was still Imogen. She still had her wicked sense of humour, accusing respite staff of locking her in a dark cupboard, taking gleeful pleasure in kicking small children. Not able to howl with laughter any more, still she would grin widely and shout a yes if there were ever a chance to insult a friend.

And she loved God. New Wine was a highlight of the year for her; she managed to be up and awake hours earlier than at home, in order to make the morning worship sessions.

In her long wakeful nights, she chose to listen to her audio bible or gentle hymns.

Even in her last week at home, no longer able to tolerate any kind of food, in huge amounts of pain, she was still very clear she wanted to come to church. And with every breath she could muster, she sang.

It would be her last outing.

Imogen was tired. Exhausted. After that Sunday, she went to bed. And she was very clear she had no further wishes. She did not want to make the long trek up north to watch her friend be baptised. She didn't want to see anyone, do anything. She was done.

She knew exactly where she was and what was happening. As she got weaker she could no longer open her mouth to say yes, but settled for very clear, intentional blinks. Even the morning she died, she was able to let me know the song she was listening to was important to her, and that we should sing it today.

There were other conversations. And then there was rest.

Maybe looking at Imi, you'd think her life was sad and grim, and maybe you question the point of it all. I'm standing here to say it was all completely worth it. There was so much love, so much laughter. She lived a life that was deep and rich and full of joy. Imi knew what was important. She had a relationship with God that was deeper than many of us will ever know, and she was absolutely certain where she was going and with whom. When the time comes, I hope I can say the same.