So here's the thing.

I've written this a dozen different ways, but there aren't actually any easy ways to say it.

We came into Helen House last week, to try to sort out Imi's pain. We did sort out the pain; she's had a mostly very comfortable and settled week. Alleluia! But, we did that by stopping her feeds. Food or formula going in; unbearable pain and spasm and thrashing around in agony. No food; peace, smiles, calmness.

We tried tiny tasters of food. Instant pain and discomfort.

No food brings peace, but obviously it brings its own complications; Jesus may have survived 40 nights in the desert without food or water, but most of us don't have that constitution.

Imi is managing water (dioralyte). But 100 calories a day isn't sustainable in the long term.

We came home. By choice, last Thursday. With a plan for a big Road Trip to visit her best friend, and a promise of no more travelling after that.

Imi has other plans.

We planned to rest until our trip away; Imi was awake very early on Sunday, and adamant she wanted to come to church. And so we did. And it was painful, and she objected to the sermon (not on theological grounds; she just preferred the worship). She sang a little, hung around for coffee, and I discovered my elbows must have been getting dusty without me noticing.

On Monday, we had a chat (because, even through the fog of pain relief there are still times when she is awake, alert, happy, and communicative). She told me Yes, her body is wearing out. Yes, she's tired. Yes, she knows she doesn't need words to speak to Jesus (eye roll: mother you are so stupid to even question that). Yes she's ready to go with Him.

I asked her about our plans for the weekend. No response.

Tuesday, Imi had the most peaceful day she's had for possibly months. Heart rate consistently very very low (for her), calmness and peace, and the carers we had visiting left early as it was so very clear she only wanted to rest with her Mennonite hymns on a loop. SE Samonte playlists on YouTube, for those who want to know what Imi's been listening to much of the time.

And then she started fitting.

We had big long peaceful lovely cuddles, then our nurses came and we swapped over for a bit. Imi wasn't wanting to talk to me, but gave a big yes to having a nurse cuddle before my legs fell off.

A friend came; she and I escaped the house for a short while. Imi started fitting again, I came home, and it became clear that whilst we were making plans to cancel or postpone the road trip, Imi had a different destination in mind.

One GP, three paramedics and an ambulance later, we are back at Helen House. And as we got Imi into bed here, her heart rate settled right down again, and despite the seizures she has been very calm and peaceful once more.

Some soreness last night, resolved by finding a less bright light, rolling her back onto the side she usually dislikes, stopping her dioralyte, and giving her some extra morphine.

It's now 5am; I went downstairs to see her, and she has not stirred from where she was last night.

Calm, peaceful, and clear that her work on earth is done. 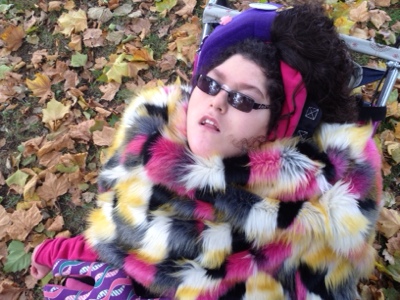