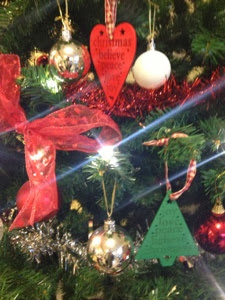 Miss Mog's busy getting ready for Christmas. I'm tempted to take the kit in for the next carol service, but I'm not sure the rest of us could keep up!

She's modeling the latest line in face furniture; her CPAP mask. She's a little overfond of it at the moment; we're hoping that having her tonsils out will help, but that can't happen until the hospital is less full of children with bronchiolitis.

After three cancelled op dates, we're now shelving thoughts of surgery until after Christmas. This means we can go ahead and get on with living life between now and surgery, including of course a rather lovely holiday with friends, rather than hiding away at home to avoid catching anything nasty. Prospective visitors with lurgies need not apply...

Which means, we're getting out and about more often with Mog's CPAP in situ.

Which means, when the battery has started to be a little dodgy, that's a problem. Happily one with a temporary fix thanks to a loaner machine from the sleep clinic.

It also means, there's a bit of a problem when your sister runs over the special cable which allows your CPAP to plug into the battery or the cigarette lighter in the car.


And so, yesterday, broken inverter in hand, I phoned ResMed, who make Mog's CPAP machine. And a very lovely lady answered the phone, quoted for a new inverter, and then put me on hold as she'd had an idea. Her idea included a cupboard full of second hand inverters, and she quoted me a much cheaper price for that.

Noting our address, she even gave me the choice of driving to their office to pick one up last night, rather than waiting for a slower than average Christmas post.

I couldn't manage that, as Mog was already in bed, but this morning I swung by their (very fabulous) office, and the receptionist tracked down the woman I'd spoken to last night. Who turned up with a shiny working inverter in a lovely blue bag, apologised for the fact it wasn't the original bag, and then told me the office wished us a very Happy Christmas and there would be no charge at all. Hurrah! So thank you ResMed, for making it possible for Mog to keep her own humidified CPAP in the car and out and about. And thank you, ResMed, for making a CPAP machine which is so silent, the only way we can tell it's on is by putting a hand over the exhaust port and checking for a breeze.

It's been a jolly few days altogether. Mog had nurses the other day, so I made the most of it by leaping into town for Christmassy stuff. First stop, the post office. Where I had the joy of watching the post mistress attempt to fasten stamps and a recorded delivery sticker to a well-wrapped golf club. It entertained the whole queue. I'm slightly worried though about the recipients of the next poster. I really hope he warned them about the contents of the parcel. Because if I received a well wrapped parcel with Christmas stamps on it at this time of year, I would not expect the contents to be worming tablets.

I then had the slightly more frustrating experience of trying to explain that Orkney is neither "Inland" nor "Southern Ireland/Eire", but in fact islands off the north coast of Scotland. However, my sister in law informs me the package arrived safely, so clearly the system knew where to go, even if she didn't.


Home the next day, and cooking with Mog. A multisensory experience; definitely educational. I thought I'd have a go at these Pretzel Turtles. Beautiful, not too tricky, and mmmm salty sweet chocolate. Sounds like a winning combination? 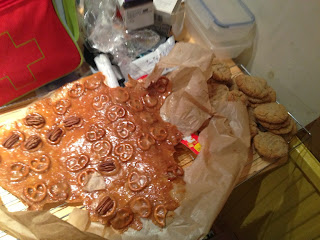 Not so much! Tasty, yes, but beautiful little circles to be carefully dropped into previously purchased small glass jars and given as Christmas presents? Maybe not.

OK, so, next plan, my never-fail ginger biscuits. Now these really are lovely (you can see the successes just beneath the pretzel brittle). I'm lazy; I've adapted the recipe from one in a much loved recipe book; I remember the changes I make, so I just start from the book each time. I should really write out the recipe, as it should be. Which would stop me from doing what I achieved this week and last time we made them with the Guides.

Grab small handfuls of the mixture and eat roll into balls, about the size of a walnut.
Roll each ball in sugar, place on a greased baking tray.
Gently flatten each biscuit with the back of a fork.

Bake in a preheated oven, 180C (350F), for 4-5 minutes until they are just changing colour, have risen slightly and collapsed a bit. Remove from oven, leave on trays for a minute or two then transfer to cooling racks. What you should have is an utterly delicious, chewy, gingery biscuit. It's good. Oh, and it makes about 4 dozen.

So far so simple, right? That's about quadruple the original quantities, but when I make these, they go quickly.

After the pretzel disaster slab, I thought I'd better shape up. And duly measured out quantities, unwrapped a slab of butter and melted it with the syrup, dumped it in on top of the flour, and then realised that 500g butter is in fact 1lb, not 8 oz. Curses! OK, no problem, weigh out another pound of flour, another half a pound of sugar, go back to the cupboard for the ginger and spices. Add ginger, finish the jar, no problem. Add the next packet, dump in quite a lot before sanity started tapping me gently on the shoulder and I realised mixed spice isn't usually dark red. Paprika biscuits anyone? 3lbs of paprika biscuit dough?  Coming after last week's utter failure to build a gingerbread house, I'm now considering officially retiring from the baking arena.


A Thursday not filled with hospital and operations, instead spent quietly spending the remainder of Mog's Birthday money on more Chronicles of Narnia AudioBooks. Nice. And then today, after a happy ResMed Christmas, a day with friends drinking coffee at our favourite local Barns Cafe (I recommend the Mocha with the full works - where else can you get a joint hot chocolate and coffee combo with whipped cream and crushed maltesers?), and then a beautifully peaceful afternoon and evening, tLP having gone to tea with friends, Mog choosing to retire to bed with the Magician's Nephew.

And so to pizza, much pizza, in memory of my precious pizza-eater, who would have been 25 today.

Dusting off the blog

Cough, cough. Knock knock, hello? Anybody out there?
It's been a busy few months.
I wanted pictures, but the perfect photo isn't coming, the imperfect ones are a little indecent, and so you'll have to make do with a word picture instead.
Five or six years ago now, a certain small girl finally swapped the NG tube she had had since birth for a PEG and then a button. From purées via feeding therapy to solids, and from overnight feeds to drinking more than enough to keep her kidneys working nicely. Via, inevitably, since tLP isn't always terribly princessly, a rather disgusting interlude when oral fluids were banned, a prohibition she circumvented by sipping stomach juices directly from the PEG. Things they don't tell you about when you sign up for these children.
Anyway, from purées and tube feeds, via disgusting episodes, to eating and drinking everything necessary, taking medications orally, surviving even after major surgery without really using the tube. Marvellous.
And so, time to remove the tube? Well, no, tLP decided she wanted to keep her button, "because it's me." Fair enough. But a sore, manly, discharging, revolting stoma held open by an unused gastrostomy button and bleeding all over ever white school top isn't really the ideal thing to need as a part of your self identity.
Careful propaganda every time we cleaned it. Gentle suggestions from carers and nurses and less sympathetic "it wouldn't BE sore if you didn't have it any more" type comments from yours truly, and suddenly, she decided she was ready for it to come out.
She told me, I phoned our long suffering community nurse, and she found an almost instant spot in her diary. And before tLP could change her mind, the button was out, the fairly grim hole was dressed, and tLP was officially no longer a gastrostomy user.
One week later, and the hole is just a slightly purple dimple. Much to our surprise, the mammoth over granulation has not formed a giant wart like mountain  over her stomach. A gentle purple dimple - more of an "innie" than her tummy button - and an even older tiny scar across one nostril are now the only reminders of her 8.5 years as a tube feeder.
Rather unfortunately, the dimple is a similar size to the scar left in the middle of her forehead from her first ventilator mask. So she now appears to have been shot in the stomach as well as the head. But I guess she can always use that when she gets tired of explaining why she needs the wheelchair.
Tia
Posted by Tia at 21:07 5 comments: