Imogen can't speak. She can't form words with her mouth, she can't use eye gaze, she can't use sophisticated scanning devices, and she can't sign. But she's got a very good yes/no response, and she's got a pretty good talking book (file with lists of yes/no questions to speed up the 20 questions method of communication. And she is pretty good at letting us know what she needs.

There are obviously limitations. She is reliant on someone asking the questions. It's easy to avoid asking difficult questions, questions where I'm not sure I want to know the answer. It's easy to miss her initial shout/kick/huff which means "I'm talking, come over here." And on days when she's struggling to breathe, anything other than a very fleeting tongue thrust is impossible for her. But it works for us, it doesn't exhaust her, and she surprises us regularly with what she wants to say.

Despite these limitations, Imi very very rarely shows any signs of frustration. We might get the occasional eye-roll when I'm getting the questions completely wrong, or where I'm clearly stating the obvious yet again, but she has a fine line in non-verbal sarcasm, and that'll do for both of us. So when Imi started crying one evening, and wasn't in pain, wasn't tired, and was very clear there was nothing physically wrong, it was a big big deal.

And yes, she was fed up. Fed up of feeling poorly. Fed up of being tired so often. Fed up of the breathing problems, of not being able to cope with school any more, of spending so much time hooked up to machines. Fed up of watching the same videos, listening to the same stories, watching the world go by and slipping out of the mainstream.

So we had a chat about what make life better.

And Imi decided she'd like to make something. She'd like to create something. Not a picture with a piece of paper, not having someone hold her hand and help her glue things together, but talk to something and build something beautiful.

We found an artist who works in stained glass, Sarah Glover.  And we went over to meet her. Imogen chose some glass first, deciding on particular colours, particular effects (mostly water glass apparently, with a few different opaque bits and pieces here and there). Together, Sarah and Imi brainstormed a design, Imi picking shapes and a general theme, rejecting formal designs or copied pictures, and slowly an idea built up.

We then went away, whilst Sarah did the hard work of cutting and piecing the glass together. We came back, and Imi helped to fix copper foil around the edges of a few pieces, helped to paint flux over the whole design, polished the solder and then watched (o2 removed to a safe distance!) as the piece was soldered together. We washed the glass ourselves, then handed it back to Sarah for finishing.

And then we came back again, to find this. 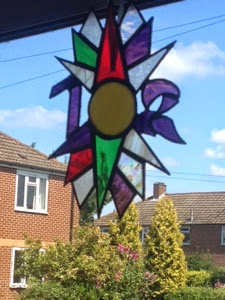 Not the best photo, but a clock-shaped piece of stained glass, with the sun at the centre and a carefully selected and shaped set of glass shards surrounding it. Imi's colours, Imi's age, Imi's design, Imi's choice. And a thing of beauty sending light into our house.

Imogen is pleased with it, and proud of it, and ready for her next project. It's taken a bit of tweaking, and we're not ready to start it yet, but she'd like to do something with an old clock. She wants to buy one at auction, something I've never done, so that'll be an adventure for both of us (and not at all an indication that she watches too much daytime television sometimes!), and then make it beautiful. If we can find a local clock maker (and if anyone local knows someone with clock-mending skills, do please send them our way), she would like to find a non-working clock and fix it. If not, then we will find a working but shabby clock, and polish it up and add her own ideas to how it should look.

She's very clear that she wants to start with an old clock from an auction (which is a shame, because I could find a clock kit far more easily, but hey ho), she wants a clock with a big tick, and one which she can have in her room (so it's going to have to be fairly small).

Imogen also wants to look at other people working. She is surrounded by nurses, carers, doctors, cleaners, cooks, teaching assistants, therapists and even occasionally meets a teacher. So she would like to see other people at work. I'm not sure how we will sort that, but if you have an interesting kind of a job, work relatively locally to us, and could make space in your work for her and her entourage, she would really like to see what other people do with their lives.

Imogen doesn't have a lot of energy. We are finding that one thing in a day is enough, sometimes more than enough. Too much excitement, and she can and will sleep for the next couple of days. A trip to The Barns, a walk to the park, a hospital visit, a music therapy session, and that's pretty much a full week these days. So we are also looking for things she can do from her bed or a cool spot under a tree in our garden. We are hoping that we will have a dog at some point in the future. But in the meantime, if you have a portable one (who wouldn't eat our cats), then she'd love it if you could bring it for a sneaky cuddle. She's also interested in snakes, lizards, and rabbits, although probably not all at the same time!

We can't change Imogen's future. She is tired, she is fragile, she gets uncomfortable a lot, and at the moment she seems to be asleep more than she is awake during the day (and the opposite at night, sigh). But we can make her daily life more fun, more interesting, within the constraints placed on it by her health. So if you have any ideas for mini adventures, please do let me know, and I'll see if she's interested.
Posted by Tia at 13:51 10 comments: 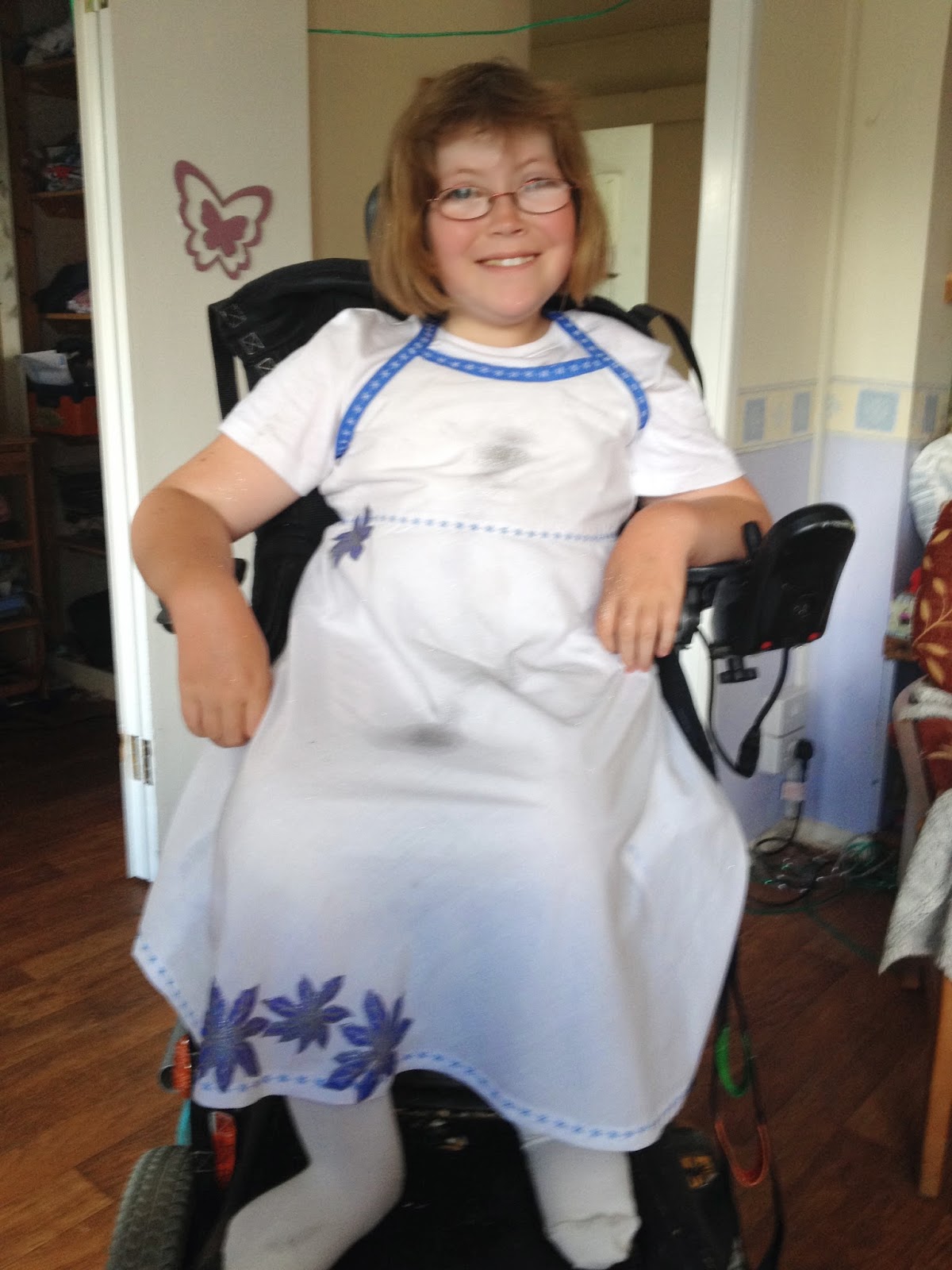 "Mummy, I need to be a winter ice dancer." Costume: white, pale blue or silver, with snowflakes. In June. Nice.

Still, I don't think we did too badly, did we?

And a cancelled operation meant that Amana was able to be at all three nights of her school play; nearly compensation enough for the fact that we won't now be able to stabilise her spine until after the summer holidays.