Eight years ago, we moved house. We had a very simple plan; pack up, drive across town, unpack, be reasonably sorted, then take Mog to Helen House for a couple of nights, get Goldie to hospital for a minor op, and have both girls out of the house so I could get things straight.

Things didn't quite go to plan. The mortgage money didn't reach the relevant bank accounts until late afternoon, and without it, the estate agents weren't going to hand over any kind of key. Eventually we had the key, and I had just long enough to tell assorted people which bedroom belonged to which of us and remind people that under no circumstances were the removal men to be allowed to assemble Goldie's bed (complicated profiling hospital bed, we had a spare bed for her to sleep on that night, and the medical company were coming in the morning to put it back together again), before I had to run with Mog and introduce her to the hospice staff.

Mog duly settled, I left her in good hands and returned home to find that everyone had interpreted "do not assemble the bed" to mean "we'll do Tia a favour and assemble the bed", incorrectly and invalidating the service contract on it. But I'm not bitter. They'd also helpfully unpacked the kitchen, sorted beds and bedding for everyone for the night and beyond, begun to unpack all the rest of the boxes but ensured we had a wheelchair spot all the way through the house. Organised chaos.

Friend went home, family went home, and Goldie and I settled down for the night. In the morning, we escaped the house just as the workmen arrived to dig up the drive and build a ramp to the front door. Mog being reasonably happy at the hospice (it was her first ever visit), Goldie and I went off to hospital. Where we sat. And waited. And sat around some more. And waited some more. And eventually they found a bed which did have bed sides, and someone came to clerk us in, and then she went down for her surgery.

It occurred to me then that my plan may not have been entirely sensible - rather than having time and space to unpack without the distractions of the girls, I had in fact committed myself to being at home to unpack and sort workmen, being in hospital with Goldie, and being at the hospice with Mog. Not my finest plan.

But still, we survived, and we all came home. And then the fun really began. Goldie's minor op turned into three months on bedrest. And so she lay in her bed, giggling, as the hoist engineers came to fit a hoist in her bedroom. And she giggled for the whole eight hours it took to drill giant holes in concrete blocks to fix the hoist to the ceiling, finding the whole thing hugely entertaining as they attempted to barricade her off with her wardrobe, protecting her bed and her television from the worst of the dust, and shuffling her around the room as they attempted to find the best spots for the hoist.

And slowly, we unpacked. We moved from a three storey Victorian terrace to a '60's flat. We swapped huge bedrooms for more useable living space. So nothing quite fitted where it was intended to go. And the spare boxes ended up in the corner of my bedroom, and in the cupboard in Goldie's room. And the house began to feel reasonably assembled.

Fast forwards a few years, and Little Princess is moving in. At 22 months, she moved with her entire life to date in cardboard and plastic boxes. And it all got wedged into the bedroom we were now sharing, in the cupboard in Goldie's room, and in odd corners wherever we could find the space.

Fast forwards again, and Goldie has moved out. We are having all our floors taken up, covered in latex-free screeding, and then latex-free flooring being laid on top. The house needs packing into boxes, we need to move out, and when we move back in again, Little Princess moves into her own room. We unpack the necessaries, and the "might be useful one days" get stuffed into the corner of my room, and the cupboard in what was Goldie's room and now belongs to the Little Princess.

A few years later, and I am in the process of super-cleaning the house. I have a system, it's actually very effective, especially for the first few rooms. As I sort, everything which does not belong in the room I'm sorting gets put in the room where it should be. If that's a room which is already sorted, I put it away, otherwise it gets dumped on the floor/windowsill/bed/wherever. The first room gets sorted in 5 minutes which is a nice motivator to carry on. Second room takes a little longer, as anything belonging in the first room needs putting away. Third room takes longer yet, and so on. My bedroom, as the worst room in the house, I tend to leave until last.

And then just as I have finished the rest of the house, an emergency foster placement has me setting up a cotbed in my room for the Wahooligan. He stays with us for just a few weeks; the cotbed remains a fixture for the next three years. It becomes my wardrobe, my actual wardrobe being increasingly inaccessible due to the ever-increasing tidal wave of general cruddage, seeping slowly across the floor and leaving me with stepping stones from door to bed. Boxes are stacked, 3 foot high, in front of my drawers, and loose papers and other stuff heaped up and around the chair and onto the wardrobe.

Redecorating the bathroom left a large builder's trug full of bathroom equipment filling the gap between cotbed and my own bed, and more clutter found its natural home under the cot.

Enter Grolly. We are going away next week. She can't come with us. She can't go to our regular cattery as the vet thinks she isn't ready for her boosters yet. I'm not willing to put her in a cattery which accepts cats without vaccinations. And she is so clingy post shed escapade that I don't think she will cope with just a daily visit to feed and water.

And so a friend willing to come and house sit for the week we are away is hugely appreciated. Except that, unlike an odd night here and there, it feels a bit mean to say "Hi, thank you for rescuing us, please camp out on the sofabed." So sorting out the room, at least enough that it was possible to reach the bed without jumping, open the door properly, and have some floor space to put a bag down suddenly became a priority.

Several hours in, it occurred to me that I should have taken a before picture to scare me into never letting it get this bad again record for posterity. Not wishing to go back to utter chaos, I took this mid sort pic. Actually seeing the armrests on the chair mean the big pile-o-stuff has been reduced by several feet. 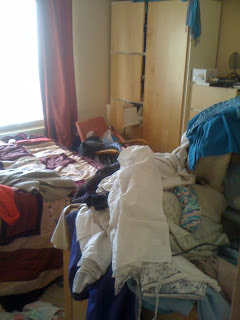 Two days in I was seriously convinced this would never ever get done.

But, today, after 5 bags have gone to the Helen and Douglas House shop, with another 3 bags waiting to go, with four boxes ready for the tip, a recycling bin filled 8 days before it's due to be collected, a rubbish bin also full but due to go out tomorrow, and a small forest's worth of reasonably confidential documents shredded (and, worryingly, just a small handful of documents actually worth keeping), I can see my floor. 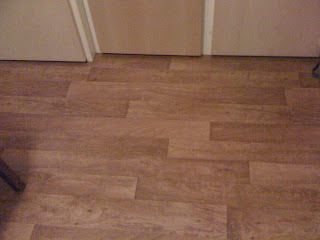 And it is shiny! 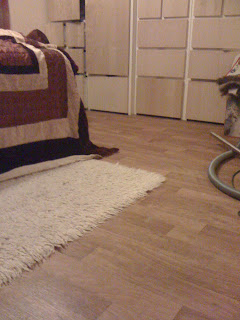 It isn't perfect. But oo look at all that floorspace! Add that to the three wheelchairs and two specialist armchairs Demand took off my hands earlier this month, the various boxes of "use it once a year" stuff which has made it back to the garage, the major clearing out of the cupboard in the Little Princess' bedroom, and I am pleased to say that not only is the last house-move box finally unpacked, but that the house itself appears to have grown by several feet in each direction.

And the best bit? We're going away for a week, home for a few days then away again, so by my reckoning, I can't possibly mess it all back up again until at least mid-November!

I am INCREDIBLY impressed!
K x

SOOOO glad I popped over here - you made me smile!!

Well done, I have a declutter long overdue, if you weren't so far away I might ask for your help.....