It's a good thing my friends know me. Surprisingly, I was actually early this morning when meeting a friend for coffee. Early enough that as 10,000 Reasons hit the speakers, I thought I'd turn up the music and sing, rather than turning off the engine and getting out of the bus. Note for future reference; always a good idea to check your friend wasn't even earlier than you, and isn't in fact watching you through the window. Laughing.
Oh well. It broke the ice.
A child-free cup of tea; mine at school and respite, and hers one grown and the other much grieved for.
I remember first meeting my friend's jewel of a daughter; she and Mog were at a holiday club together. And I realised this was the precious child whose photo sat above Mog's on the almost empty hospice board (a board now full to overflowing). Dancing hands and a hidden smile, full of secret joy.
We became friends, her mother and I, over shared outings without children, and shared "oops she's really poorly this time" stays in hospital and hospice. It cuts through some of the clutter which gets in the way of building friendships when life is so caring-busy.
And then Ruby got sicker, and it was clear she wasn't going to get better. And life slowed right down for my friend, and for a while her world shrank to the four walls of her daughter's bedroom, with brief escapes to check the rest of the world was still around.
We buried Ruby the same day another friend's son died. Last year was utterly relentless.
And now Mog is still sick. And whilst she did, technically, have a very successful op last month, it didn't have the effect we were hoping for. And now we are going to have big meetings about what we think we should be doing for the best for her. It's a road my friend has travelled, and it is good to have someone who has walked it.
As another friend says, I don't know what the future holds, but I know who holds the future. That has to be enough, but friends who have walked this route know how hard that is.
And this past year has been tough on my friend. Things don't stop when your child does, there are still 24 hours in every day, and the world out there still moves to its own rhythm. How do you deal with the disconnect between our world and the wider world?
My friend has found a way. 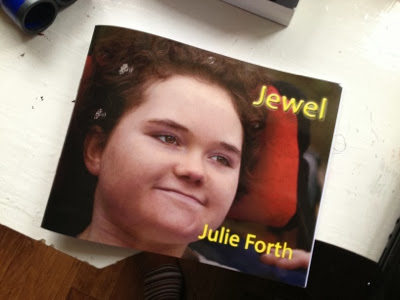 A collection of poems, from Ruby's life, and from the life which will insist on going on, even when your child doesn't. It's a beautiful book. Raw, real, precious. (And available here
http://www.lulu.com/shop/julie-forth/jewel/paperback/product-21339856.html
if you'd like to read it for yourself).
So we talked life and poems, practicalities and dreams, and then it was time to come home and get on with the next bits of life again. But because we'd had our chat, when the next professional helper phoned, I was all ready with my next suggestions, knowing what I needed rather than trying to work out what might be helpful. An instantly useful outcome, as well as the soul-food which is time spent with a friend.
I'll take that,
Tia
Posted by Tia at 17:02