In which Benjamin Bounces 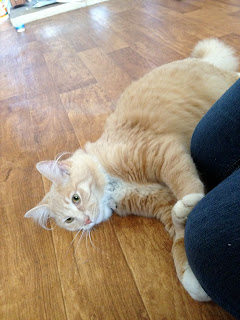 This is the face of a loopily recently anaesthetised cat.

And this is the story of how and why.

Both cats like to take walks with us. I think Grolly prefers it when it's just her; Benejamin prefers to walk beside us, pause and bounce onto Grolly's head, and then spring back to us. I think it's the colouring; Tigger blood runs deep. Anyway; she's not impressed and much prefers it when we leave him inside.

It was Benjamin's turn last night though, and he decided to accompany us to Brownies. Both cats usually stop when we reach the garages just past our house, but occasionally one of them will venture across the road before panicking and running back. We don't encourage the road crossing. Actually, Grolly gets halfway across the road, then panics and starts crying for help. I've had to post her back home more than once before now.

Anyway, yesterday, Benjamin decided to be more adventurous. Crossing the road, he walked to heel, cat-style. Which means, for the uninitiated, he walked between my heals and over my heels and mainly under my heels, causing an increasing amount of worry as we got closer and closer to the Big Main Road where Gotcha met his end last summer.

I was about to give in and carry him home, when a car drove past. Panicking, he ran for home; unfortunately running directly into the path of the oncoming car, hitting the wheel with an almighty thud and a crunch and a squeal and a cat bouncing along the road.

Add a seriously shaken driver, an overinterested canine witness, and two girls late for Brownies. A brief pause, no pools of blood and incredibly, he had picked himself up and raced off, so I decided to drop the girls at Brownies before going hunting.

He limped his way home, and was seriously underimpressed to be scooped up and taken to the vets for a thorough overhaul. Initial exampination showed no obvious injury other than two scuffed paws, but some creaky hips which would need X-raying in the morning.

Home then, with instructions to keep him in my room overnight in case it turned out he had done something to his diaphragm. Benjamin quite enjoyed the being shut in my bedroom bit, but was distinctly less impressed with the whole starve him from tea-time ready for anaesthetic bit. At 4 AM, when he'd moved on from licking my chin to chewing my nose, I decided his diaphragm was officially not ruptured, and banished him to the sunroom instead. It's soundproof; useful in a cat prison.

Back to the vets, who knocked him out and X-rayed him. The Little Princess is impressed about this and thinks he must be very naughty; she always sits still for X-rays and doesn't need sleepy medicine. 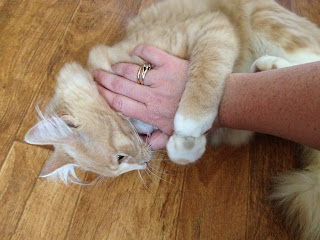 Two little scuffed grey patches on his paws the only visible signs of any injury at all. 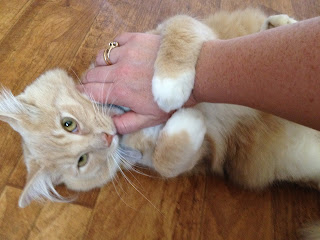 The need for cuddles and thumb sucking revealing a little more of clinginess he's been showing ever since though. 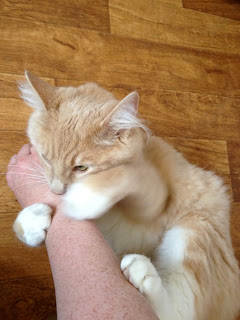 I have a feeling he's used up more than one of his nine lives though; and if you were the woman driving the grey mercedes (no it wasn't you, A!), then I'd like you to know he really is absolutely fine; apparently Benjamins bounce. He'd better not try it too often though!

Get him a harness and get him used to it... at least that way he'll never again be likely to have an argument with a car within sight. In honesty, if I thought you'd go for it I'd be advising you to consider whether the cats maybe should be indoor cats, given their and your history with serious road injuries in just the last year. Harness (NFCs are particularly good at this) is something of a compromise, and I really do think worth a try.

My 3 are strictly inside-only for a variety of reasons: one has hip dysplasia and doesn't climb or run well, one has a (mild) brain injury and is clumsy, trusting and completely lacking in any sort of common sense, and we live a) tens of yards from two main roads and b) in a not very nice estate where not very nice people with not very nice dogs are a real threat to a tame and trusting cat. So it's indoor only, a couple of big lavish cat trees for climbing and claw-sharpening, and lots and lots of galloping up and down the corridor.

If you did want to have a go at having Inside Cats, I've picked up a fair bit of info about how to make it work, particularly with a cat who used to go out but now needs to stay in - I had a Palliative Care Foster-cat a few years back who really did have to stay inside but, we think, had been living on mean street for quite some time, perhaps hadn't even been in a house at all for most of his life, and so had a fair old bit of adjusting to do.

I did try to keep Grolly and Gotcha indoors. Grolly refuses to use a litter tray, no matter whether it is just for her own personal use or shared, irrespective of what litter I use, and where I site it. I'll put it in the places she uses instead, and she'll find somewhere else to go.

She doesn't go far (apart from her epic 27day stint in someone's shed. But she likes to go around the block, and her greatest joy is hunting fresh leaves. Shut in, she pines.

I've tried a harness with Benjamin. It's entertaining, but not functional! He uses his Ragdoll floppiness and splays himself out like a carpet, then sproings up and somehow leaps straight out of it.

I could try to trap them both indoors but it just goes against so much of what feels right. I make decisions for the girls which may shorten their lives - we aim for quality of life over quantity every time. How can I decide that for the girls but keep the cats caged when they would so clearly prefer to be free?

I am also very glad he is okay. I love cats, and if my husband wasn't severely allergic I would want mine back (currently living with my friend's parents- she has joint ownership).

Giles is indoors only as he has FIV, and is now completely blind. We also used to live on a main road and in an upstairs flat so an outdoor cat wasn't practical.

I hope he has learnt his lesson about roads though- my husband is glad I can't walk at the moment as I used to forget that roads were roads and wander into traffic :P