Miss Mog hasn't had the best of times lately. A nasty UTI cunningly disguised itself for too long as a prolonged bout of not sleeping very well and being generally grouchy during the day. As not sleeping makes her grouchy (and her not sleeping makes me grouchy), we put it down to general acheyness, the weather, growing out of her chair, changes in her body shape and general growing up grumpiness. Until she made it very very clear whilst at respite that there was very definitely something more going on, and she needed it sorting now, please, if not sooner.

Oops. One of the hazards of being non-verbal, and not being able to access your preferred means of communication when life is just making everything horrid, is that people put your grottiness down to feeling generally grotty, rather than searching for the cause. Or rather, people scratch their heads a lot and say hmmm, because the symptoms aren't right for the usual causes, but are very right for general nastiness. We'll now add UTI to the list of things we can try to check for next time, but in the meantime, I Miss Mog has had a bit of a poorly time.

Three days into antibiotics, she was feeling much better. Suddenly misery was swapped for giggles; only for the brief period of time when all the painkillers and relaxants overlapped, but still, there was a window when the world was not truly horrible, and there was a possibility that life might start getting a bit better again. Hurrah.

Mog was much much better by Thursday night; fit to go back into respite so I could take tLP into hospital for a sleep study. And so much better on Friday that she managed the last day of term; hurrah.

And I think it's safe to say she's definitely back on top form now. 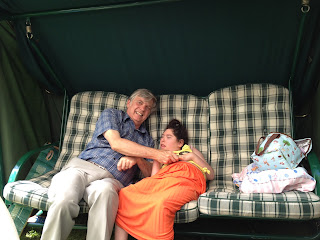 Giggles with Grandad are always a good sign. Grandad's great at whistling and jiggling simultaneously, and there's a special grin Mog saves just for him. We like. 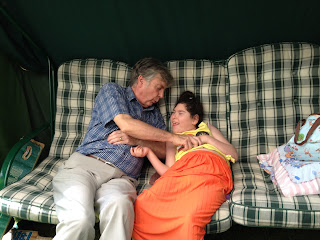 And now I'm writing this on Sunday night, and Mog has gone to sleep, without protest, without Nitrazepam, without Chloral Hydrate, without paracetamol or ibuprofen or a mallet. See, I said her not sleeping makes me grouchy in her usual sleeping position, with her CPAP and has the look of a truly settled child about her again.

I'm sorry we missed it until it was really bad, Mog, but I'm very glad you're feeling better now. And, as a side effect, we now have another possible medication to try next time you do have your "I'm grotty and everything hurts but it's really lots of bowel and bladder" type pain, and we do know all the other possibilities are still possibilities, and we are trying to get your wheelchair sorted out, and you are on the list for Botox, and we will do our best to make sure things improve for you. And now I hope you've had your summer illness, and you can now settle down to smiles and giggles and summer fun instead. Any chance?

Tia, any chance of trying her on Baclofen? I take a *teeny tiny* dose orally 3X a day and it helps a lot.

She used to be on baclofen but we couldn't increase her infant dose without her drowning in secretions. When we took her off it, she was immediately more alert with better head control, less choking, and able to lie down and breathe at the same time.

She is currently on Tizanidine which does reduce her spasms but causes her to sleep for a couple of hours after the morning dose, and doesn't take the spasms away completely. Has stopped the very worst and most hideously painful ones though.

Love Grandads special smile. Jonathan has always been very close to His Granddad too.