So back in May, Mog had a wheelchair appointment at school. We discussed the fact that we aren't going to go for spinal surgery, agreed that probably three monthly reviews would be a good idea, and made an appointment to be seen at the wheelchair clinic in June, with a view to sorting out a more comfortable chair.

And we turned up in June, and discussed the options, and agreed that she didn't need some of the features her current chair had, which would free up space for some other features which she could do with.

We agreed on a model of wheelchair, made plans to come back to have the seat cushions moulded, possibly before the end of term but more likely August, and went away, dreaming dreams of this amazingly comfy new chair.

And then the appointment came through for the start of September, and I was annoyed, but not really surprised.

And then the appointment in September was cancelled, two days beforehand, and we were given not one but three separate appointments in October, and told we must attend all three or else none of them.

And I was not amused.

So I phoned the wheelchair clinic and got stuck in the system, and finally spoke to someone who insisted that if we couldn't make the third date in October, we would have to have three entirely new dates in November and December. So I complained.

We then finally managed to achieve what I'd been trying to do in the first place, and had direct conversation with someone who actually had the power to sort things out for us. She explained why the September appointment had been cancelled (and it was for genuinely understandable and entirely unavoidable reasons - had this been mentioned or had the cancellation letter at least begun with an apology, I would have been significantly less annoyed about this), and promised faithfully that Mog would not have to wait until December for her new wheelchair.

Further communication followed, and we were able to keep the first two appointments in October, without being expected to commute back from Florida for the third. Still not ideal, considering the fact that the need for a new chair had been agreed back in May, but best we could get at this point. So hurrah. Ish.

We came to the first appointment, and discovered we wouldn't be getting the original model of chair discussed, but instead a new version of the Chunc.Now the Chunc is to my mind the Marmite of wheelchairs; you either love it or you hate it. It most closely resembles a bit of Meccano; bolts and slidy bits and, well, to my blinkered vision it just looks like the kind of chair particularly suited to twelve year old boys. I know friends love it, and they're not all weird, so there must be something in it. But I don't. I liked Mog's Discovery, and I'd become used to the look of the chair I thought we were getting. However, there were excellent reasons why they were now recommending this chair (Chunc Recline with custom seating for the wheelchair techies out there), so  we went along with it.

Meanwhile, thanks to the delay, not only were we getting a different base, but Mog's Botox appointment had come through, so we were getting a slightly different body posture, with the possibility of bringing her arm down. So perhaps the delay wasn't a dreadful thing after all. We were also able to go to Florida with the old chair and not worry too much if it met with a dreadful accident midair.

Finally, last week, the chair itself turned up. Excuse the black headrest; I'm told a navy one is on its way. 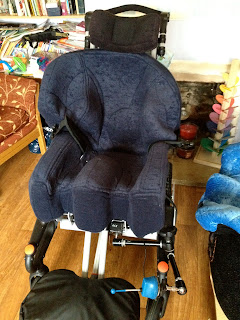 Note extended sweep to stop her arm from falling off and upwards. Ignore the shape of the back; we're all good at that round here. 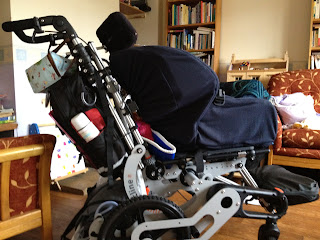 Rejoice with us over a) a sensible suction pump tray with clips to hold it all in place. And b) the bag which came with it, which is large enough to hold all the stuff we had in three separate bags previously, without feeling crammed. And kindly ignore the slight design flaw which has the brake controls inside the wheels, neatly blocked by the suction pump. Who needs brakes anyway? 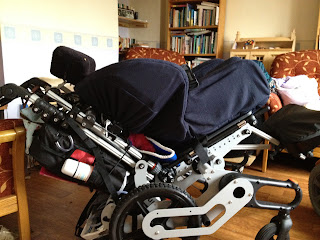 It tips back. A long way back, and the design means it doesn't foul the suction pump tray, and the handles aren't too low to push, even when fully tilted. 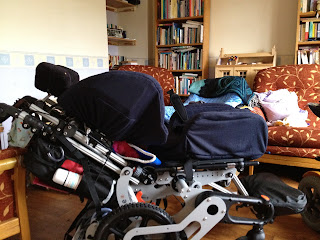 It also reclines. A long way. 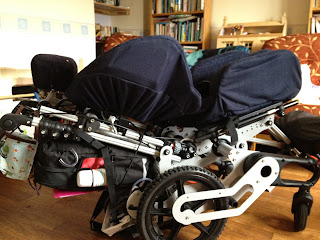 We'll ignore the fact that if I recline it more than this, with everything we have on the back, it falls over. And concentrate on the fact that there are anti tip levers, should I wish to use them.

It bounces. Friends tell me this is gentler on their children than non bouncing, and I have no reason to disbelieve them. I just hope it doesn't make her seasick. And I do have to eat my words; it is supremely easy to push, very easy to turn around, despite being longer than her previous chair. Oh, and her switch can now mount in such a way that it moves with the angle of the chair, remaining within reach no matter what, rather than having to  be readjusted every time we tweak her position. 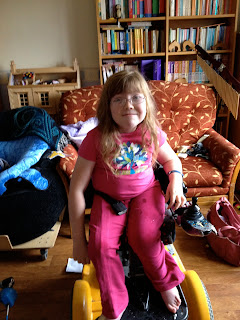 And she just looks comfortable in it. What's that you say? Wrong child? Yes; sorry; I keep forgetting to take the photos, and tLP was getting cross because I was wasting important cuddling time by photographing an empty wheelchair.

I can see that it is well designed. It does the job it's supposed to do, and I think it probably does it well. I still think it's an ugly beast; but I'm sure I'll grow to love it the more I see Miss Mog inside it.

I hope Mog likes it! You've made me feel like a 12 year old boy, I love the Chunk. It's so easy to push it makes fields easy.

I'm glad for all the wonderful things it does for Mog, but it is NOT pretty, is it? I think I agree with your "ugly beast" comment! ;)

Hoping all the buttons are sorted, and tLP's foot is healing!
Alesha

It's not the prettiest chair, but it looks comfortable and I hope it helps Mog. I kinda want one :-P

(I'm not sure what chair I'm getting yet, as I'm waiting for my appointment for an assessment. I'm hoping for a power chair that I'll be able to tilt and recline myself so going to the toilet may be a possibility. We'll see :-) )

Danni I hope you find the right chair. Mog's old chair had a bouncy back, so she could stretch herself out when needed. This one doesn't have that, so we have to do it for her. But the design of the chair is better - it's definitely comfier for her when she's lying flat than the old one was.

We tried to visit the penguins for you when we went to Seaworld, but the bit where they live was closed for renovations, sorry.