Merrily we roll along

After a certain amount of unorthodox use (see earlier blog posts for details), the Little Princess' wheelchair decided to celebrate the end of term by going on strike.

We had, a few weeks ago, overridden its ability to take a holiday by bursting a tyre. Two puncture proof front tyres followed shortly by two puncture proof rear tyres, and it decided it needed a new way of getting a rest.

With fiendish timing, the heavens opened at 3.10 precisely on the last day of term. The one day of term when I collect tLP personally rather than letting the bus bring her home.

We dripped a couple of hundred yards from school, at which point the Tank beeped at us and juddered to a halt. We turned it on, it switched itself off. We switched it on, it limped across a drive and switched off again. Leaving me with no choice but to push the 125kilo chair with 25 kilo child on top, in the pouring rain, all the way home. It's not all that easy, when the road is cambered and the chair has no push handles. And steers from the front. Marvellous.

Still, phoned the company and they cane out within the hour and armed with a standard set of override the off setting instructions. Which didn't work. And so the tank went back to the workshop, its second home.

And it's been there a week, and although they have tried everything to get it working, the part it needs had not arrived from Holland yesterday, and so we aren't going to have it back this weekend. Which is a problem, because we're camping from tomorrow, and although tLP has been building muscles wheeling her manual to the park and back, mud and gravel and manual wheelchairs just don't mix very well. And the lightweight manual has two flat tyres and is just a bit too big, and the heavyweight NHS issue manual she can't push outside for more than 20 yards, and not at all on grass.

An immobile Princess is not a good thing. Natural imperiousness becomes exaggerated to a ridiculous degree. And she's stuck with whoever is willing to push her.

And so, I had a look online to see if I could find something, anything, that would get her mobile again for our week away. And there on eBay sat a little yellow Permobil Koala, the very chair we'd looked at when choosing the Tank (Skwirrel2). With three hours to go, no bids, and a very cheap start.

I bid. I won. And not only did I win it, the previous owner had to drive from Cambridge to London this morning and offered to deliver it to us at silly o'clock. And then apologised, many times, for not having washed it for us. I really don't think he understood when I explained it would be spending the next week in a muddy field.

So there we have it. Mobility for the Princess, fastest eBay delivery ever, and either a back up powerchair for next time the Tank sulks, or else something I'm sure I can put back on eBay and make back what we spent on it.

It isn't perfect; the armrests seem stuck at separate heights, the controller has definitely seen better days, the strap's chewed, and the charger is covered in parcel tape. But tLP is finding it easier to drive around the house, loving how it fits under tables so easily, and has gone off with Grannie to put it through its paces. I suppose I'd better get cracking on the packing. 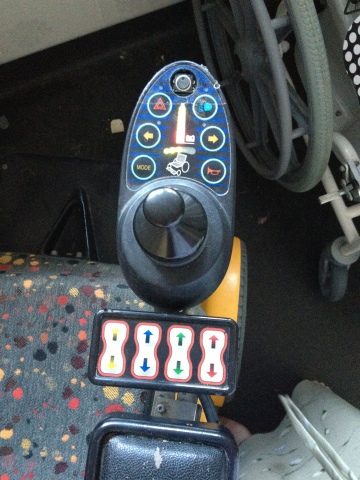 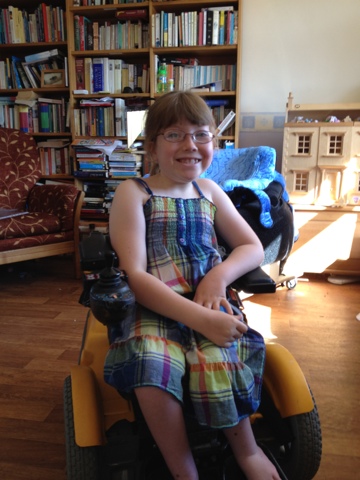 Horrah! Glad tLP has mobility, and hope you all have a wonderful holiday. Did you look at the Snapdragon; bit of a combo of Skwirrel and Koala, and I believe very reliable (but expensive).

Yay! I love hidden bargains on eBay. I managed to get my current tilt in space chair for £95 because they accidentally listed it as not working (it works fine).

I hope you all have fun camping :)

TLP looks so grown up! Glad that eBay saved the day, fingers crossed for just the right sort of weather for your holidays.

Hey big sis, as one with considerable experience of punctures with big TZ thorns I can recommend http://www.slime.com/ as something that really should work for you.