Getting ready for Christmas

One of the joys of losing the ancient back-boiler was the prospect of losing our fairly ugly gas fire, an integral part of the boiler.

And it's gone. Great. Except - we're now left with this. 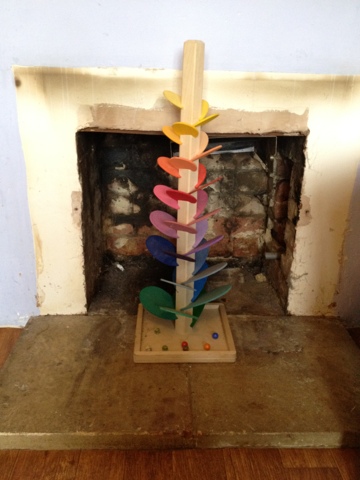 I'm informed the concrete slabs aren't large enough for any newer type of fire, but if I remove them then there will be a concrete slab sized hole in the lino; I'm not convinced that's an improvement. The chimney thingy needs boarding up, or lining, or something. It needs a vent installing, although it seems plenty draughty as it is. And, hidden in that photo (which also does an impressive job of bleaching the blue walls white), is a metal flue, apparently suspended from the chimney pot at the top, and dangling somewhat precariously into the gap.

So, short of leaving it all as an express Santa Chute, anyone got any suggestions?

When our external wall became an internal wall we left the gap where the gas flue was and got an electric fire that covered it. Yes, it's a bit draughty when it's windy and it's on our list of things to sort out. Given the current rate of DIY it'll probably happen in 2020 ;-)

2020 sounds good - we've been here eight years now and still not finished repainting. Maybe another eight will do it!

Oops, hope I didn't give the impression I meant at your place. Apologies if I did. I meant here at mine. Hubby always says "I'll get round to it". It usually means years later.

No you didn't; I was just identifying!

Same thing here. We blocked the flue (sp?) with a thing bought from Homebase and got an electric fire that looked like a wood burner.