We're New Winers. From our first visit, with my most favouretest ever photos of tLP, to the disappointment when chicken pox cancelled our attendance the following year, to scarily awesome excellence in 2010, to sunshine and more conversations, I've always left with a very clear sense of direction, something big or small (and often unblogged-about, but knowing what I needed to be doing next and where Gad was in all of this. Hurrah.

Until this year.  Now, please don't misunderstand. New Wine was great. Despite crying and pleading to be allowed not to go (and then making a total nuisance of herself the one time we listened and let her come to the grown up meeting instead of going to her age group), the Little Princess says that Ground Breakers was the Very Best Thing. Mog opted out of Our Place (special needs group) and Rock Solid (age group) both, and chose to come with us. I don't think the fact her princely friend came along too had anything to do with that decision. But I couldn't swear to it.

And God was there and it was all good. Awesome. There aren't many times in life you can be sitting in a giant tent and watch a church friend come to the front, because God has healed his knees, and the stiffness and immobility he had following surgery a few years ago has gone. And then come back to the front a few minutes later, because not do the knees now work properly, even the scars have disappeared! Fantastic stuff. God is great.

At that same meeting, Mog was sitting on my lap. And as the speaker was praying for tendons, muscles, sinews, her arm, which is usually stuck fast up here 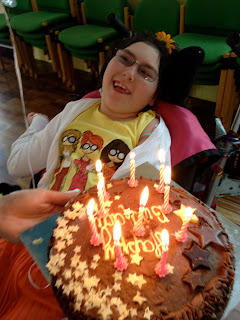 relaxed beautifully and brought itself down into her lap. 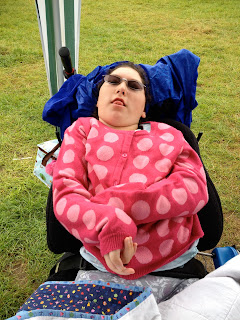 Not a position where it will voluntarily move to; somewhere we can sometimes move it to when she is stoned to the wide on vast doses of diazepam extremely relaxed, but where as soon as we release it, it will ping back up to shoulder height.

This arm bothers Mog. Being in a wheelchair doesn't. Not being able to talk doesn't seem to, as long as she can get her point across with her Talking Book or adroit questioning. Seizures, except the painful ones, don't worry her. But having an arm which sticks out and gets banged on doorways and knocked against lampposts, and pulls on her shoulder and drags her body over, that bothers her.

When we've met surgeons, Mog has been pretty clear that she does not want to do anything about her back. Yes, it's twisting. But no, she doesn't want surgery to stop it twisting more. Which is a relief, because I don't want her to have that surgery either. But meeting the surgeon who has a special interest in arms, Mog was so clearly able to get her wishes put across that the surgeon stopped talking to me altogether and dressed herself entirely to Mog. Who responded, very clearly, that she wants something done about her arm.

We've had investigations. And, despite having said she'd never have another anaesthetic after her hip surgery five years ago, we've agreed to her having botox into her shoulder, in an attempt to loosen the arm and allow it to be brought forwards. A less radical option than cutting the bone in half, rotating it 180 degrees and pinning it back together agai; potentially not a long term solution, but at the very least worth a try to see if we can get the results we want.

So when we sat in the meeting place, and Mog's arm came down and relaxed, I thought that was an answer to Mog's prayer. Wonderful stuff. Very exciting. No need for surgery, a good solution to the thing about Mog's disabilities which bothers her the most.

And then we woke up in the morning, and Mog's arm had boinged back up to its previous position.

And there it sits.

And I don't know what to make of that. True; it's looser than it was. We can get it back to that midline position sometimes. And that's encouraging as far as the botox is concerned. I hope that means that when she does have the botox, she will cope with having it strapped down against her body as the botox takes effect, and that there will be fewer body spasms as a result.

But still. I'm very happy for our friend with his knees. I know he'll make hugely good use of them in all he does for God. But but but...

It doesn't make sense to me, I don't understand it, and I suppose that's another demonstration of how much bigger God is than I am. It does seem very unfair though - and I know Mog still wants prayers for her arm, although I think now we're praying that the botox goes smoothly and is surprisingly effective. It's difficult asking for prayers for Mog. People see her wanting prayer, and jump in enthusiastically to prayer her out of that wheelchair, or to heal her whole body. And she's never said that's what she wants. They don't always listen first.

For me, I know that as she sat on my lap, she snuggled in. For a few brief moments, her whole body relaxed. Not as it does after much medication for seizures, but just as if she were any other child snuggling in for a cuddle. Her body doesn't do that. It's either medicated into floppiness, or there's a stiff resistance from her spastic muscles and contractures. I love cuddling Mog, but hers is a one-way hug. Sit her the other way around and her body leans out, not in. And selfishly, I'd love to experience that again. I'd love to see Mog not being slammed back against her chair with involuntary muscle spasms and seizures, just sitting, relaxed, and able to control things for herself a little more.

I'd like to wrap it up with a nice neat solution or a gently positive bon mot. But I don't really have one. It doesn't feel fair; I'm sad for her. I'm trusting God, of course I am, but I'd like to see the bigger picture. Why show us something and take it away? Was it real? Enough people saw it that I'm confident it was. But then, why so temporary? And other questions.

I don't have any answers either. We have watched Isaac get answers to prayer that seem to disappear later, too. I've seen it for myself as well.

It is hard, and doesn't seem fair; but I just keep holding on to all the things I know are true: God will not give me more than I can bear. He only does what is BEST for me, all the time. He loves me far more than I can even fathom. Those basic truths get me out of bed on some mornings. :)

I know you must have truths that you hold dear to your heart too. Keep clinging to them, until the pain eases, and the peace returns.

Praying for Mog, too...although, I often feel that Isaac understands his Heavenly Father far better than I do most of the time!

I have no answers, but I hope the botox treatment provides relief.