Pathetic compared to other parts of the country, but still enough to close the girls' schools, cancel our carers, lose our milkman and delay our drugs delivery. 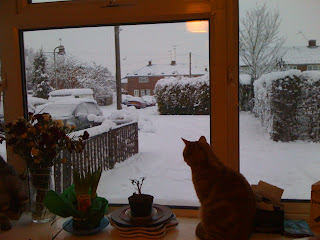 That's not really a complaint; it's pretty and I love looking out at it. So do the cats. All three of them decided six o'clock this morning was the perfect time to go and explore it (that'll teach me to open the door to get a closer look). Goway very sensibly dashed out, dashed back in and made full use of the litter tray. The other two bounced out, got wildly bogged down in it (Norwegian Forests not, apparently, being terribly full of snow. Strange; I'd've thought it would be a reasonably common occurence), panicked mightily, and then cowered down together behind our green bin. And cried. So if you're a neighbour, and you saw me outside at silly o'clock in a spotty dressing gown and unzipped boots, clutching a furry waily thing under each arm, now you know why. I blame the neighbour with the cockerel myself; he crows so loudly all three cats hear it through the double glazing (as do the rest of us), and this sends them wild to try to catch and kill. If the cockerel's still here this summer, and crows again at 4AM I might just be fairly wild to let them do it too.

So, despite a stupidly late night courtesy of one child and an insultingly late morning care of the other one, I had many fresh and inspiring plans to go out and make the most of the snow. And then more snow fell, and I realised that walking down our ramp was difficult enough, and any kind of wheeling would be a total impossibility. So plans to meet the school's challenge, make a snowman and email it to the head teacher were shelved in favour of reliving another of my childhood memories, and making a tent in the sitting room.

Mog was in favour of this; her task was simply to lie back in a comfy armchair and anchor the tablecloth. Little Fish was very in favour of this, and used the tent as cover to empty the book shelves, divest her doll of all its clothes, hair, and facial features, and munch her way through chocolate biscuits. I was in favour of this; LF was at least voluntarily limiting her sphere of destruction, and I could reheat lovingly prepare a vat of broccoli and stilton soup for lunch.

I think that moment was probably the high spot of the day and I should probably consign the rest of it into oblivion. I don't want to remember the soup rage, the mustard powder incident, the chaos three housebound cats can cause with two buckets of litter, the projectile vomiting into my hair, the Movicol induced brown dripping all over what bits of floor weren't already covered with cat litter or mustard powder, the long, long hours til bedtime and the further cancelled visits and appointments.

Nope, busy repressing all that. I'll stick with the fact that snow in moonlight is hauntingly beautiful, we don't actually have to go out at all and we do have lots of yummy food to eat, new toys to play with, new DVDs to watch.

And now I think I should remove the 3/4s of a banana I've just spotted sitting on top of a stack of DVDs, go and catproof the remains of the reduced mustard macaroni cheese, and spy on two sleeping girls. Now that's a beautiful sight I get to see every single day and never get tired of watching.

Do you really have a milkman? Are there glass bottles and everything? Is that common where you are? Here in the U.S. milkmen only seem to get mentioned in jokes regarding one's suspect parentage.

Yes we really do have a milkman. Glass bottles left on the doorstep and everything! Unlike the milkman of my childhood, he only calls 3 days a week, and to change the order you need to go online rather than leaving a note rolled up in the neck of one of the bottles, but apart from that, it's pretty much the same set up.

What big 'fraidy cats those giant Norwegian fluff monsters are!

We had milk men when I was growing up and up until my now 40 something son was 10. Loved it.
The picture is a beautiful one. We are getting snow also had three inches so far!