Variations on the theme of brown. 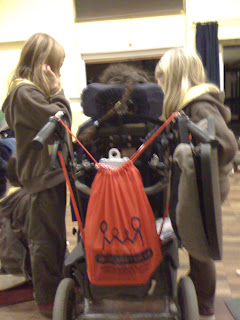 This is the view I get on Tuesday evenings now. Mog and her six, working together. It's beautiful - one writes in her notebook for her, another checks her answers, occasionally they call over to me for information they need but more often they check with Mog herself. They danced this week, and choreographed their dance so Mog could join in with kicking legs and her air-guitar hands. And Mog won the weekly Brownie Shield for joining in so well. Lovely.

A less beautiful brown is the brown I'm washing out of everything; she is having a problem with her Movicol these days and I'm not convinced it's quite fright for her any more. For which experienced carers may read, I'm fed up of having to hose her down from neck to knee on a daily basis, and the whiteness of her school uniform is starting to suffer.

A nastier yet brown would be one of the many colours inside Little Fish's Gastrostomy. We had an appointment with the surgeon yesterday, who was unfazed as the brownish yellow slug of pus shot out of the stoma towards him with the removal of her button. He was sympathetic but unfazed too by the blood curdling screams Little Fish uttered as he attempted to silver nitrate the excess tissue around the site. And pointed out as I winced, that she had started the screaming before he touched the stoma at all, so it really wasn't pain related; a fact borne out by her ability to switch off the screams instantly as he stepped away, and to recover herself.

Next step; find someone to help silver nitrate it at home or face the prospect of having to drag her back to hospital once a week until it's gone. Fun times. I'm thinking the hospital itself may be willing to send someone out on home visits; if she screams as loudly as she did this time then the anxiety levels in the waiting room are likely to be growing ever higher. Although I suppose with scared children running for the exit, the waiting times for the remaining brace ones might come down to something less than the 90 minute delay we had to sit though. Which in itself wouldn't have been dreadful, if another child hadn't already selfishly discovered an effective way to beat the queue puked all over the floor, chairs and play table.

Little Fish in a brown study all the way home; thinking deeply and not able to concentrate on anything minor like staying awake or eating tea. Or following her own evening routine, meaning I'm reasonably confident there will be brown studies of a different kind to deal with this morning.

Three cats ready to welcome us home last night; all three immediately raced through the door into the pouring rain. Not normally an issue; Goway can take care of himself, Grolly will run around for a few minutes then be lured back inside with the promise of yummy treats, and Gotcha generally runs down the ramp, realises it's all cold and wet, and then bounces back up again. Not tonight. He clearly heard the call of the wild, and decided to chase around the cul-de-sac, under cars and over hedges, bouncing and running and generally celebrating his freedom.

So far, so annoying, but nothing more. I shook his giraffe-on-a-stick which normally has him racing back to kill and destroy. nothing. I shook it again, and a Little Fish heard him cry. Jingle jingle, followed by a faintly desperate meep meep meep. Repeat ad tediam. Heading out into the rain I went to investigate the cries. And found that he had wedged himself between a fence and a hedge. The way out was easy, but involved retracing his steps through our neighbours' garden and moving away from the house. This he was too scared to do, wanting desperately to come back inside and have food and fuss.

Making a long arm, I hauled him through a gap in the hedge, where he clung to my shoulder in a desperately pathetic "I'm just a tiny kitten and it's a great big scary world out there" manner which would be taken more seriously if he weren't so big and heavy my shoulder was struggling to take the strain. He was however terrified. Longhaired wet muddy cat with terror induced incontinence; a whole new layer of brown to deal with.

So for the cat experts out there - I tried bathing him but he wasn't having that. He consented to much wiping and pulling and trimming with scissors, but I wasn't convinced our Original Source Lime showergel was the right thing to use (so didn't!) - but for the future, what's the best thing to do? As it is I've now got a newly ventilated cat with gret bald patches. And despite my best efforts and his, we've still got the odd brown bundle clinging around his tail and back legs.

best way to bath a cat, in a pillow ncase, hold gently round its neck and if you pour shampoo on top of the pillow case it still goes though to wash kitty!!
and i use kids shampoo on our cat, never seemed to mind and smells nicely of watermelon!!!

Not that this helps you out at all but we're in the brown here too.... lots and lots of brown. I think its finally slowed down, that brown. Next week we'll go to town to see if we can get rid of that brown, and get rid of that frown caused by that brown.

Hi! I'm Ashley and I'm in Newfoundland. I am also physically disabled and I found you through Tudu's blog (I think!)

Looking forward to reading more about you and your girls! I'm going to start reading from the beginning, now :)