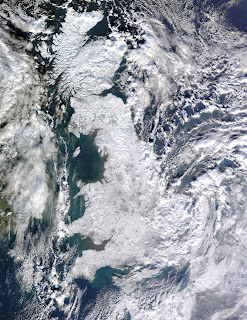 Looking through our cupboards and freezers, and adding in the supplies my parents kindly fetched for us today, I think I can now confidently state I could feed the girls and I for six weeks without shopping again, although we'd probably be tired of lentils towards the end of that time. The cats however would start going hungry at the end of a fortnight. It is ridiculous how much they can eat.

If our gas were to go for some reason, we've enough electrical heaters and other bits and pieces we'd be inconvenienced rather than cold.

If our electric were to go, we've eight hours (the battery life of Little Fish's Nippy). Which got me wondering, what happens if we do get a prolonged powercut? A friend having had the better (worse?) part of a week without gas or electricity just before Christmas. Going into hospital seems excessive, and I can't imagine the hospital would be overenamoured with the idea either. Ought I to be hunting for a generator?

Seige mentality. Crazy really; we live on a fairly densely populated estate, four families in this building alone at at least 20 neighbours within shouting distance. But not having set foot outside since Tuesday apart from to photograph the snowblob and rescue the kittens is making this flat feel further and further away from civilisation.

We get visitors; they appear on our doorstep and stamp snow from their feet, shake ice from their trouser legs and take the chair beside the fire, despite the fire being a) gas and b) off. They bring tales of having to dodge people skiing down the street, cats clinging to roof-racks, empty shelves in supermarkets. And inside, we plod on, Little Fish plays with her dolls and her pens, Mog supervises us all, and the cats eat the hyacinths, having decimated the poinsettia.

In praise of our care agency; the manager phoned up earlier this week to check we were alright, most of our carers having cancelled due to transport difficulties. I said we were, and I understood the problems they were having, but wondered if it might be possible to squeeze in some extra visits once we rediscovered our more habitual green and pleasant land. I wasn't expecting anything to be possible, so last night's visit was more than welcome. Doubly welcome was the card she brought with her from a friend; presumably the visit she'd made before coming to us! It almost makes up for the fact tomorrow's visits have been cancelled because the carer who should be coming doesn't feel comfortable driving in snowy conditions as her car is higher up than most people's cars. Why is it higher up? Because it's a 4x4...

I realised today that Mog has managed three days in school out of the last five weeks. Setting aside the week in hospital, she's been very seizure-free during this time. Certainly for the last 2/3 weeks, she's had her inevitable big seizures first thing every morning, but after that, it's been limited to eyeflickering and the odd isolated jerk. And yet, flicking back through her school communication book, she's had prolonged seizure runs most days at school.

So what's the difference? It is quieter at home, but with three rampaging cats and a four year old, it's a long way from being totally silent. Are we less stimulating? Is boredom a better way of keeping the seizures at bay? Or does watching High School Musical (all three on a seemingly neverending loop) provide some kind of dampener to epileptic activity? It has a depressing effect on my own cerebral cortex, certainly. Or is there something else in the school environment causing an increase in the seizures? Flourescent lighting? The acoustics? The whiteboard? Not much I can investigate whilst we're homebound anyway, and not looking to keep her homebound forever; she enjoys being at school when she's well. But I'm sure she'd fit in more if we could reduce the fitting.

More snow predicted for next week; one of the girls' schools has a note out suggesting parents might like to go in tomorrow afternoon and shovel the entrance so it can open on Monday. Considering it's supposed to be snowing most of tomorrow night, I'm not entirely certain this will achieve very much other than burning off some of the Christmas chocolate calories. And considering the road leading up to the school hasn't been gritted and is reasonably lethal, I'm not convinced getting there to shovel would be entirely sensible either. I shan't be volunteering. I shall instead curl up on the settee, enjoy the view, and enjoy the Little House books (always best read when warm and cosy with a cold view) whilst attempting to be deaf to pleas of "Mumma my baby needs a pink jarma acos he is cold". I'm told it's benign neglect and will lead to greater independence in future life. Unfortunately, thus far, it seems to lead not to a child able to find other ways of entertaining herself but perforated eardrums as requests become demands become tantrums.

We may or may not have a carer tomorrow; if she can get her car out of the drive she's going to try to get here. We may or may not make it to church tomorrow; if our carer comes we stand a reasonable chance of being ready on time. But then we might actually have to leave the house. I'm getting used to this hibernation.

And now I need to make the most of it, and snuggle into my lovely goosedown duvet, and imagine that I can hear the wind wuthering, whereas in fact the noises are gently snoring children and a boiler chug chug click clunk whirring away to keep the place toasty warm. Better in than out, as my Grannie never used to say.

*picture from earthobservatory.nasa.gov
Posted by Tia at 20:52

snap on the picture!! We too have been discussing siege mentality and now being on day 4 with no water and until this morning surviving on the dregs of the oil for the heating how we take things all our mod cons for granted! Tinned tomato and chickpea soup in a couple of months then?!

Register with your electricity provider so that they are aware that you have a genuine need for a constant electricity supply (Little Fish's Nippy- life saving medical kit). They should prioritise you and provide a generator and connect it free of charge if the power is cut for any reason.

If I had chickpeas I'd make hummus. I'll trade a can for half a bag of puy lentils, a large bag of split peas and a mahoosive box of indeterminate dried green things if you like?

Not entirely sure how we'd made the trade mind you.

I'll swap some pot noodles(!) for some lentils ;) (snowbound in the city, and for some reason that's what the uni offered me).

I'm hoping the hospital wont be too stressed about lack of outpatient attendence - not happening when the snow is so deep in the road.

If it's the same hospital as last time they cancelled our outpatients' appt last week - I can't imagine getting down their driveway in any kind of bad weather.

I would be somewhat hacked off at potnoodles - hope you have a way of accessing something a little better - have contacts in the city who could deliver if you're stuck?

The carer who won't drive her 4x4 in the snow - good grief!! I bought a 4x4 (well, AWD, but I think it amounts to the same thing) specifically so that I would feel safer driving in the snow! I have to say it works well.

Funny that, about Mog fitting more at school than at home - there must be a reason. Hope you can figure out what it is.

It's the other hosp unfortunately (although the individual team is v understanding, admin aren't necessarily...the weather has clashed with 2+ outpts depending on what happens next week).

The other are happy to let me study from home :)

Crossing my fingers that ocado can get through tomorrow ;)


I hope you do find out why Mog's seizing more at school (different environments? I know sz triggers are so varied it can be hard to work out)...and that you feel better soon and the snow goes completely!