After holding my breath in for far too long.

One Mog, coughing but smiling to herself this evening after a day spent mostly asleep.

One Little Princess, so much better now her caecostomy is no longer draining pus.

Two "imagination babies"; Tyler and Zak, who apparently need very careful watching. They kept her up all night because Dad was away, so it was just her. And they jumped out of bed and ran around on the floor, throwing clothes and all sorts, apparently. This earned them a severe and unaccompanied nap time as we went to church.

Sitting in a different space in church; strangely dislocating. Two rows further back and on the other side, not a huge difference, but a change in perspective. Also disconcerting, other members of the congregation who installed chairs and huddled right at the back rather than accept my tweaking of Mog to allow them through to the two empty rows beside us. Hey ho.

Decorating the tree this year, directed almost entirely by tLP and it doesn't look at all bad. Certainly no worse than I've managed in the past. Lametta hides a multitude of imperfections.

And then a late afternoon stroll to check other people's Christmas lights. Abbreviated because Tyler and Zak wouldn't hold hands to cross the road, and were running into traffic.

So home, and tea, and pyjamas and bed and now two girls sleeping, two cats washing, and the house and I can both breathe out and look forwards to some quiet time together; I think we may have both girls in school tomorrow. Hoorah. 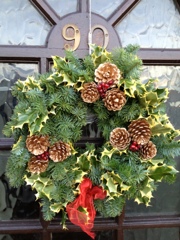 Whew...busy days lately for you! So glad the girls are sorted and hopefully feeling a bit better!

And yay for a decorated tree!!! Some years it takes longer than it does others...we've had one up for up to a week, I think, before we were able to finish it. ;)

Hoping both girls made it to school!
Alesha