Two friends
Who have been friends a long long time. 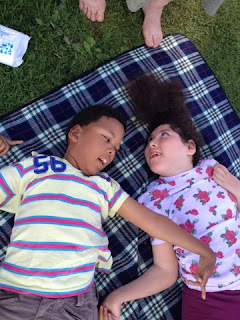 Who have each at times been written off by people who should know better than to place limits on a child simply because the writer-offers don't know how to assess a child who doesn't tick neat little boxes. 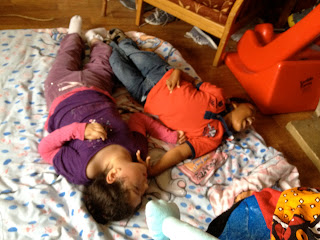 Two friends
Who don't need words to show appreciation for each other. 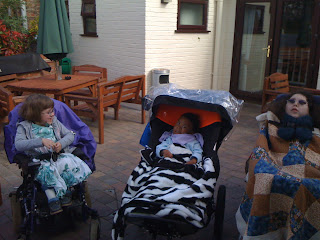 Who, despite being more than capable of "accidentally" using teeth when having a cuddle, have never yet bitten one another. 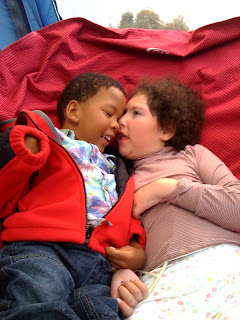 Who don't forget each other even if it's six months or more between meetings. 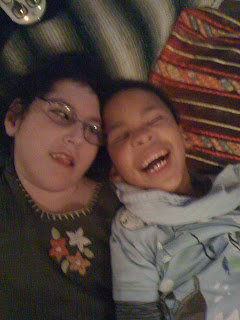 And now Mog's knight, her hero, needs new wheels.
He has the most amazingly bendy fingers; put a standard joystick in his hand and his fingers bend around it back towards his body, making it almost impossible for him to drive a standard chair.
And he has a variety of different needs which mean his local wheelchair service cannot provide a power chair for him, and even if they were able to do so, they would not be able to provide the extremely specialised chair he needs. 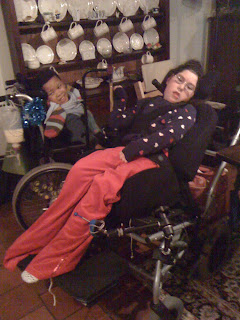 Mog's Mr Sunshine is stuck wherever anyone pushes him. So's Mog, but her particular combination of nearly constant seizures combined with a massive visual impairment mean that a power chair would probably be a rather dangerous tool in her hands.
But Mr Music Maker watches the Little Princess and others with power chairs, and he aches to be mobile himself. He's borrowed tLP's chair; he has a chair very similar to hers, and he practices diligently both in it and out of it, to make the movements necessary to drive it. But he needs something more technical if he is going to have independent mobility.
Mog's Knight has a rather fabulous carer, Sarah. Sarah is choosing to spend her 22nd Birthday swimming 22km, in the hope of raising some of the approximately £20,000 needed for a Snapdragon, the wonderful chair which will have Sir Knight galloping without the leading reins. This is a link to the Turbo Trust's justgiving page, if anyone feels like helping her to reach this target.
Tia
Posted by Tia at 20:49

Tia, how did the LP's sleepover go??

Been and donated. Hope to hear the Sir Knight gets his steed as quickly as possible.