I don't as a general rule bring politics to this blog. I'm not a party member; I do vote, and I haven't entirely lost confidence in the hope that somewhere under the spin there may well be some MPs with integrity. In all parties. However much or little I may agree with their world views.

But I can't ignore this.

Geoff Clark, a UKIP candidate, has suggested that abortion be made compulsory for foetuses found to have Down's Syndrome, Spina Bifida, and other syndromes which "would make them a burden on the state as well as on the family."

And according to the article linked above, a UKIP spokesman has defended his right  to hold these views (and other fairly unpleasant but not disability specific views), and suggested that he would make an excellent candidate.

Mr Clark has now, apparently, apologised.  If you can call it an apology. He "meant no offence" and he wishes us parents well. It seems writing something quickly, whilst being unaware of the views of the political party you represent is an acceptable excuse for advocating something one step beyond the eugenics of the Nazi party.

UKIP have now distanced themselves from his views and suspended his membership.

But I can't help wondering, do they really genuinely distance themselves from his views, or were they surprised by the outcry his manifesto has produced, and have they had to move on swiftly from backing him as an excellent candidate despite his rather unfortunate views? 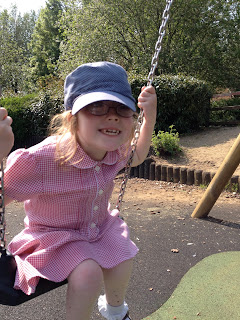 And, in case you're thinking he might have a point regarding out of control budgets, answer me this. Is my daughter a burden? Or a blessing? 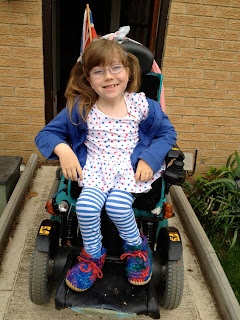 True, she's one expensive chick. She's pretty high-maintenance. She's just spent the morning in hospital, having a minor procedure under general anaesthetic, and I don't like to think about how much that might have cost.

It's also true that when she was born, and when the full extent of her disabilities became apparent, the doctors around her didn't think she would survive. She left hospital, not because she was better, but in order that she might experience love, ordinary things like the wind on her face and raindrops against a window, rather than spend her remaining days in SCBU's basement broom cupboardlike side rooms.

But those doctors were wrong, and Geoff Clark is wrong - how can you see her as just a bundle of debt?

Whatever your opinion on abortion as a woman's choice, compulsory abortion can surely never be acceptable? And if it is, I don't want to live on this planet any more.

Obviously you're right. Between her and Geoff Clark, it's pretty clear who has made the biggest contribution to the world. Every photo of her makes me smile.

Don't let him upset you. No one agrees with him. His personal manifesto is so foolish that when I read it I almost wondered whether it was a skit.

His clarificatory statement now says that he doesn't support any of those ideas but they should be reviewed nonetheless in view of the stated and agreed aims of all political parties to cut the national debt. Quite quite astonishing, as though life were a balance sheet and all that matters is totting it all up.

Before I just thought that he was an amoral, unprincipled and unempathic politician (unfortunately not as uncommon a combination as it should be) but now it's clear that he's an actual idiot to boot. Can you imagine going through life, blundering about like that? I feel quite sorry for his poor family. He must be such a burden to them.

My best to the Little Princess (formerly Fish), who also makes me smile.

My beautiful 26 year old daughter has spina bifida. AFTER SHE WAS BORN I was told that she would need a shunt for hydrocephalus, that she would never walk without sticks or calipers and that she would be incontinent. She walked without aid a fortnight before her first birthday, she potty trained herself as I assumed it wasn't going to happen and she was the dancer of the year at her dance group at age 15. She was one of the lucky ten percent that don't need a shunt. She has completed her degree - a 2:1 from a top uni- and works so hard in the city that she has had promotion after promotion. She is adored by everyone that knows her, like your beautiful girl, she has an indomitable spirit and great empathy because of her own experiences of scars and operations. It terrifies me that diagnoses are made on babies in the womb when they were so very wrong about my child after she was born. I could not have considered an abortion, I would never condemn others- but as you say, to make them compulsory would create a barbaric world totally at odds with the love and beauty our girls have given the world.

Wonder how many politicians here (in the US) and there would change their minds --if they were mandated to spend time with families who had special needs kids. Then they could actually say that they had first hand knowledge of the blessings these special ones are---Now I know this won't happen--but one can always dream and hope--that somehow/someway they will get some sense knocked into their thick heads.

Compulsory abortions sounds like something out of the worst nightmare scenarios of a society. May it never come true!


(I have read articles in our newspaper about women in China being forced to abort, very late in their pregnancies, because they already have a child. So I guess in some countries, the nightmare is already there.... May we never have to experience it!)

Do not let this monster upset you.

UKIP have been making a lot of progress lately so it isn't surprising that plants like this pop up with extreme views to discredit the party and stop its advance. It is not UKIP policy and never will be.

That really pissed me off when I heard on the news. Don't take me wrong, I'm pro-choice, which actually means there is a choice! And hopefully lots of information on alternatives to abortion. And education. And mandatory waiting periods. And so on and so on.

While I'm not from the UK, it made me angry enough to send an email and tell them just how awful the whole thing makes them look internationally.

Ti, how awful, but of course the man is a complete idiot, and hopefully is not representative if his party's views. your girls are a delight