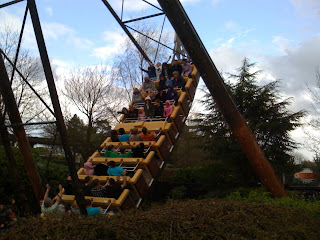 (small one in a blue raincoat, second row from the top). 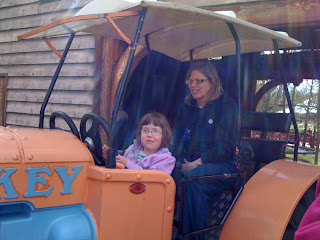 And for the Guides?

I have no idea - we didn't see them all day! I assume this means they were all busy having a good time.

Our own stay got off to an interesting start; we arrived at the hotel, checked in, and were handed our keys. "Family room, madam". No - we had specifically booked an Accessible room. "Oh yes, there's a lift and there's lots of space in the room for you." No, an ACCESSIBLE room. Two girls in WHEELCHAIRS. An Adapted Room. "Just one moment, Madam"

45 minutes and a pint of diet coke later, the computer system having apparently been upgraded to one which did not carry over the minor information that we needed an accessible bedroom, we were faced with several options. We could go back to the room we'd booked originally, before deciding to pay extra for the bedroom with wheelchair access (they only make the 6 bedded rooms accessible, not the 4 bedded ones) and be refunded the difference. We could take two 3 bedded accessible rooms. Or we could keep the 6 bedded room but also be given a 3 bedded accessible room so we could use the showering facilities in it, but it was unfortunately on a different floor of the hotel. We took the 6 bedded room and decided showers were not essential.

So, into swimming costumes and back up to reception to grab wristbands for the swimming pool. Which, thanks to the Guides Getting Away, was going to be closing 4 hours earlier than usual, 1 hour earlier than we'd been told. Twenty minutes in a hot tub then, before tea. Not such a problem; if we'd spent any longer than neither T (accompanying friend) nor I would have made it out of the pool and down the stairs to the girls' wheelchairs.

A decentish night's sleep; the closeness of the beds making it easy for me to reach the silence button on Mog's alarm before it woke anyone else. Little Fish ecstatic to be spending the night in bed with Mog, T and I thankful that the girls were so keen to share and that neither of us therefore had to take the top bunk.

And then a day in the park. Bueatiful day, fantastically helpful guest services who sorted out easy access bands for us all, so no queuing (shame about the Guides). Slow rides for Little Fish, Whizzy rides for Mog, free tea and coffee for the Grownups and not a Guide in sight. Two heavyish rain showers; we missed the first by cunningly entering an indoor ride just before it started. The second made up for it. Take a look at that first photo.

See that beautiful blue sky? We didn't - just as the ride got to its highest point, with Mog doing her wide-mouthed-frog smile, and fellow Guider screaming in our ear, the heavens opened and the rain fell not with a gentle pitter patter nor yet a steady beat, but with the curtain of water effect you get when a perfectly level bathtub upends itself. Up, up, facing the ground with a sheet of water hammering at the back of our necks, then down, down, to get the hair well rinsed, up, up, the other way, with the force of the rain closing eyes and running into nostrils... Mog loved it!

We tipped the puddles out of her wheelchair, wrung the cushions out and plonked her back inside, before racing for shelter in a fairground stall. The path, which had been damp before, turned itself into a river running over our shoes and up our ankles. Our very own personal monsoon.

And then it stopped, as suddenly as it had started, and we wondered why we'd avoided the ride we'd decided not to do just 30 minutes before - the one where we didn't want to get soaked.

Coffee time. And then home time; two very tired but happy girls in pyjamas in the back of the bus, two tired adults arguing with the sat nav. So, we didn't see much of the Guides - guess they really did Getaway. But a good time for the rest of us. And we'll be back.

Have a wonderful time, love that Mog was enjoying the ride xx

Looks like you had a fantastic time! IS that an amusement park you went to?

They just built an all accessible theme park just down the road from me and it opened two or three weeks ago. We will be going there in May to check it out. It's supposed to be completely accessible to everybody including people with all disabilities and children. It is in San Antonio, Texas.