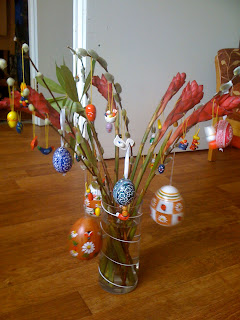 Don't tell anyone... but Mog actually slept for six whole hours last night without alarming. At least I assume she did; new monitor does very smart and clever things meaning it only alarms when there's really a problem instead of every time there's nearly a problem, but it doesn't appear to have the facility just to scroll back through the night's readings unless you can download the data. Which I can't. Still, she's still here, and I feel loads better for a decent five hours, even if I did then have to keep jumping back up again to check the monitor really was working.

Unfortunately, Mog managed this better night by lying on her side all squished up, and celebrated by being very uncomfortable with masses of spasm this morning. So I think I need to go ahead and roll her anyway tonight whether she's alarming or not. Still, it was a good run.

And because I had a decent night's sleep, and because therefore sleep is ot the only thing on my mind, I thought I had better make some Hot Cross Buns for tomorrow. Sadly, I appear to have made agnostic Hot Cross Buns - all the ingredients are there but nothing's risen. First batch unleavened. Second batch over baked. Batches three and four are proving now, an if they don't work either I'll be etching crosses onto slices of toast and those eating it will just have to like it.

Well, it is Pesach at the moment - maybe you've got Hot Star-of-David buns instead? :D

You are so patient! To make three batches. I am sure they are delicious. Enjoy the company. Happy and Blessed Easter