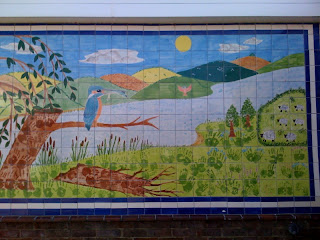 Playscheme today for both girls. An empty house - bliss.

Playscheme happens in Mog's school, which was also Goldy's school for a while. For a long time, Goldie's pictures lined the corridors - photographs of her riding her trike in the snow, doing some "traditional Tudor wheelchair dancing", taking in part in Christmas plays, just generally being part of the school. Over time, the coridor displays have gradually changed, swapping the class of '05 for more recent displays.

It's got harder walking down the coridor; I know memories aren't erased as the displays are replaced, but they're photos I don't see at home, different pictures, different glimpses of wild hair and shiny eyes and glee glee glee. Last time I walked the coridor, the last photo had gone, school well and truly moved on. As it should; it would be a little hard on the newer children if their achievements were never marked. But still, a little difficult to be reminded there won't be new memories ever.

And so today I collected the girls from playscheme, coming not down the main corridor but through the pupil entrance. A few minutes early, I paused to look up at the mural, made a few years ago, when Goldie was a pupil. It's not a picture I get a close look at very often; parents don't tend to use that entrance. I hadn't appreciated the trees and grass were made using pupil handprints, although I do remember the whole school being involved at the time. Looking closer, I realised all the handprints were marked with their owners' initials. I also realised there were an awful lot of children whose initials I couldn't translate into names. But, tucked in amongst the DCs and JWs was one set of initials very familiar and totally unique. So her face may have gone from the walls, but I think it's fair to say she will always have a hand in the school. That'll do me.

awwwwwww fantastic! must admit to a little tear there....miss her xx

Aah! How wonderful! There is a placque at the grade school form Amber when we donated the wheelchair swing in her name. I am so glad we did that because that is what Amber would have liked.
I am glad Goldie is still leaving her mark!