What not to blog

So much goes unmentioned here.

Slightly Bigger stuff; pressure sores where there didn't ought to be sores, a seemingly neverending backlog of appointments to chase, tweak, rearrange, attend, miss (oops).

Tedious stuff; how it's possible to feel worse after a decent night's sleep than it is after night after night of no sleep. And how angry it is possible to get with people who take a decent night's sleep for granted, and with people who are envious of the fact that we get to use Helen House, refusing to actually think about whether they'd really like their child to qualify, knowing what the criteria for using a children's hospice is. And how angry it is also possible to get with people who, well, just people really! Incandescent woman bites her tongue (and blames the rest of the world for the sore tongue too).

Volcanic stuff; my parents still trapped in Tanzania. Latest estimates have them out there until May; rather an inconvenience when, work issues aside, they are booked to Guide Camp and Scout Camp and a hundred and one other duties and delights between now and then. I now appear to be part-funding a Scout trip to watch the rugby; not quite sure how that happened!

Other people's stuff; the stories I can't tell.

Stuff which just doesn't seem to have a story behind it 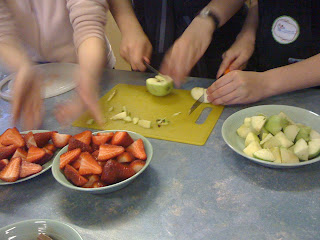 And stuff I'm trying to avoid thinking about until after all the results are in.

We're still here though. Mog is having a lovely time at Helen House. She had a good night, only two episode. Two's enough for me though; I was as worried that she wouldn't demonstrate her problems (and thus make me look incredibly foolish and over-worried) as I was that she'd have too many of them. The spies are out and inform me she's having a lovely evening too. And a cryptic one for A - K would very much like you to know that she was not only on time but earlier than the rest of us last night!

Big, little, volcanic, upsetting, relaxing... There is always so much stuff, isn't there?

So glad Mog is enjoying herself. And I do hope you'll get the rest you need. Because I too appreciate a good night's sleep when they are available.

Before Amber died I was exhausted beyong belief. You KNOW that feeling. After she died I felt guilty because I could finally sleep!
I am so glad you have the Children's Hospice to go to it sounds lovely. No, I would not envy the circumstances that make it possible.
Your dear parents. It must be so frustrating and worrisome to be stranded. I am sure MC and K are enjoying it.
Rest while you can.

Hugs! You are great at putting a smile to the craziness of life with special needs children. I wish I had that skill!! There are just not enough words or time to write the words to discribe all the unmentioned "stuff".

I have an idea why one feels worse after a good nights sleep... The good nights sleep reminds the body just how much sleep it has been missing. The body gets angry at the whole situation and let you know about it. Praying another night or 2 of sleep will help you & your body come to terms with rest issues.