Little Fish had a friend to play after school today. We've had friends before, but this is the first time it's been something planned and arranged and requested by her and her friend, and the first time we've had a friend whose only connection is that they happen to be classmates.

Slightly different then from her friends who have known us for years, from her friends who have siblings with disabilities. And so I found myself clearing the house in preparation for the visit* and making a greater effort than usual. Finding the floor in Little Fish's bedroom, I found myself hiding away the incontinence supplies. So far, so sensible. And then the wipes, the catheters, various other medical devices. Wanting to make things as unthreatening as possible for our visitor, wanting to protect LF's privacy.

But where do you stop? Hiding the incontinence stuff is wise I'm sure. Hiding the ventilator feels like a step too far. And removing every trace of anything different, even if I wanted to, isn't possible when there's a Mog coming off the bus, and when Little Fish herself has run over her friend's toes half a dozen times on the way home.

So I settled for pulling the toys to the front and pushing the supplies to the back.

I'm not really sure why I bothered though! 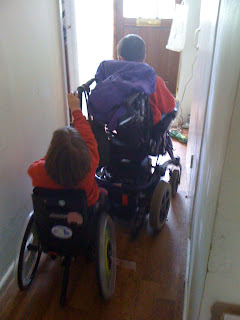 *Yes, I am aware of the futility involved in cleaning before the 5 year old invites a friend to play. But even so...
Posted by Tia at 19:29

Oh, so very cool, Tia! I hope they had a wonderful time playing! :)

so normal and wonderful